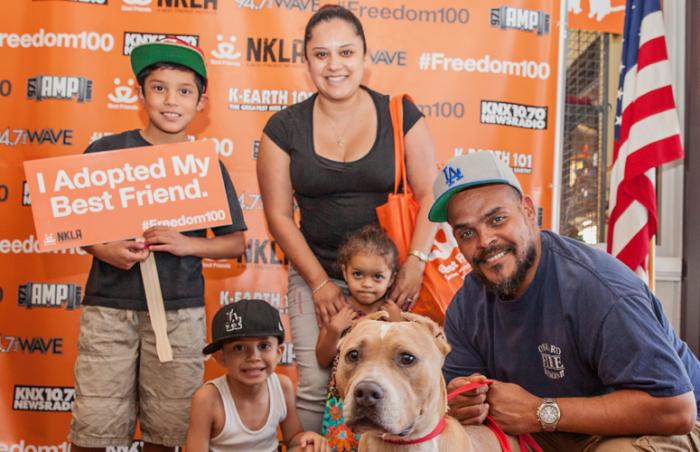 Cause for celebration for LA shelter animals

This Fourth of July weekend could have been disastrous for Heidi. The adorable little tan-and-white dog had been at a Los Angeles Animal Services shelter for a couple of weeks, waiting to be adopted. As the holiday weekend got closer and she had not yet been adopted, her situation, along with that of all shelter pets around the Fourth of July, became tenuous. Why? Fireworks.

Many pets are terrified by fireworks, and as people celebrate with loud firecrackers before, during and after Independence Day, pets get spooked, escape from their homes and yards, and end up on the streets. And that puts homeless shelter animals at risk, because lost pets crowd in and take up space as they wait to be reclaimed.

Marc Peralta, executive director of Best Friends–L.A., says, “The Fourth of July is the largest intake time for L.A. Animal Services and, as a result, killing at shelters increases to the highest level of the year.”

But this Fourth of July, shelter pets in Los Angeles, including Heidi, had lots of people looking out for them because Best Friends planned ahead, and the community stepped up just when the animals needed them most.

Let’s get ready to adopt 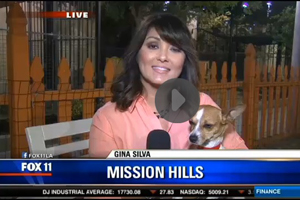 Over the long holiday weekend, July 3-5, Best Friends hosted a nonstop pet adoption marathon called #Freedom100 at the Best Friends Pet Adoption and Spay/Neuter Center in Mission Hills. The center stayed open 24/7 from noon Friday to 8 p.m. Sunday, with adoption fees reduced to $10 for the first 100 adopters. Thanks to lots of advertising, when the event kicked off, people were waiting in line to find a dog or cat to bring home.

As people adopted, Best Friends staff and volunteers headed to L.A. city shelters to pick up more pets, removing them from the risk of being killed as more lost pets arrived. Over the course of the three-day event, the staff made 10 trips to get pets out of shelters and into Best Friends’ adoption center.

“The community response was amazing,” says Marc. “People really stepped up and were eager to bring home a new pet, and that had a huge impact at the shelters.” It also had a huge impact on Heidi, because she was one of the lucky pets transported July 3 from the shelter to Best Friends.

Then, when Gina Silva, a reporter for KTTV FOX 11 news, arrived at the center to film a segment about #Freedom100, she ended up with much more than a great story. She fell in love with a little dog who looked like she had some Jack Russell terrier in her mix. And with that, Heidi not only got to be on TV, she found a home with Gina less than 24 hours after she arrived from the city shelter. 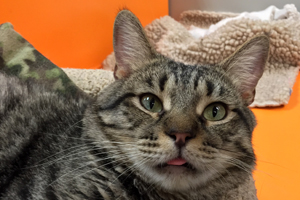 Best of all, the continued event coverage meant adopters just kept coming. As a result, pets who had been at the center for some time found homes, too. Mickey is an extra-large tabby cat who’d been at the center since January, making him one of the longest-term residents. There was nothing wrong with him, but he was shy, and if people approached him too quickly, he would bolt. It took #Freedom100 for his perfect adopter to come along and find him.

Samantha Bell, cat behavior and enrichment lead at the center, says, “A woman came in and was immediately drawn to Mickey. She walked in and said ‘Look at this big guy! This cat is huge!’” And then she asked if she could touch him.

Knowing that this was the moment Mickey’s previous chances always fell apart, everyone held their breath as they watched the woman reach toward Mickey. Lo and behold, he let her touch him. Soon Mickey was loaded up into a cat carrier and was on his way to his new home.

Due to overwhelming demand, #Freedom100 was extended once the center met its 100-pet adoption goal. When it officially ended on Sunday, 206 pets had found homes from Best Friends’ two pet adoption centers in Los Angeles, which freed up space to bring in 206 new pets from city shelters, for a total of 412 lives saved.

Marc says, “Events like #Freedom100 save lives through celebrating adoptions and bringing awareness to issues like the number of pets who enter shelters during holidays such as the Fourth of July.” All the pets who found homes from Best Friends, as well as those who were pulled from shelters and are now safe at the center, are certainly worth celebrating. No fireworks necessary.