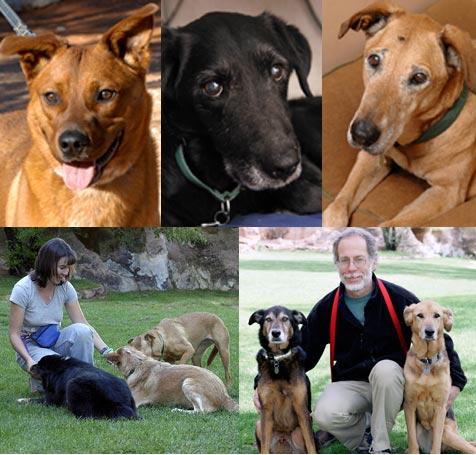 As episode three of National Geographic’s "DogTown" demonstrated, Best Friends goes to great lengths to make life better for the dogs in our care. Many of the dogs who come to Best Friends need help becoming more comfortable in the world.

It can be a long, slow process changing dog behavior, but Best Friends trainers are getting the job done, helping to ensure that people who adopt dogs from Best Friends will want to keep them.

"We realized three or four years ago that training is a big part of adoption," says Ann Allums, one of the dog trainers at Best Friends. "Shaping the behavior of dogs to be better in-house pets has become more and more our focus."

To shape or modify the behavior of dogs, all the trainers at Best Friends use positive reinforcement, gently teaching dogs that good things happen when they make good choices.

Baldwin, a red heeler mix, was one such dog. Baldwin came to the sanctuary as a stray four years ago. Until last summer, he had twice been adopted, but also twice returned – the result of a guarding drive that occasionally compelled him to bite people whom he sensed as threats to his caregivers.

After his second return, Ann took Baldwin home and began giving him time-outs whenever he displayed guarding. Baldwin quickly learned not to bite. Since last summer, Baldwin has been with his new adopted family, maintaining the good behavior he learned at Best Friends.

Dogs who are fearful of people

While some dogs are aggressive, others who come to Best Friends are simply afraid to interact with people. In these cases, the trainers need to find ways of bringing the dogs out of their shells. If shy dogs remain withdrawn, their chances of being noticed by potential adopters are slim.

"A lot of the training is about closing off the avenue for dogs to stay the same," says Pat Whitacre, a trainer who was featured on the third episode of "DogTown" working with a painfully shy dog named Jolene.

Pat has trained numerous dogs like Jolene, including Old Tom. The 14-year-old Labrador mix was at Best Friends for a number of years before getting adopted last summer. Before coming to Best Friends, Tom had lived in a chicken coop, so he hadn’t learned how to socialize with people or other animals. He would cower if anyone even looked at him.

Under Best Friends care, Tom spent most of his time at Pat’s home, learning how to be comfortable around people and other pets, learning that he could trust. But for Tom to learn these skills, Pat had to encourage Tom to interact with him and his animals, and not allow Tom to hide, as he usually would when around others.

"We had to make Tom’s first choice unavailable, so he could learn what other choices there were," Pat says. "Sometimes a dog won’t know how good life can be unless we take away his first option, which, in Tom’s case, was to hide."

The trainers find that shy dogs like Jolene and Old Tom often have amazing personalities, which remain hidden because the dogs are just too afraid to be themselves. Pat and the other trainers work on bringing out those personalities, making the dogs more appealing to potential adopters.

Sometimes, dogs will revert back to their old ways after they’ve been adopted, which is why Ann and Pat often follow up on the dogs they’ve trained. If they find out a dog has relapsed, the trainer will offer the adopter advice on how to put the dog back on course.

The dog trainers also share their expertise with the people who are around the dogs at Best Friends the most – the caregivers. Trainers continually dispense advice and training tips to the caregivers, giving them the skills they need to help dogs help themselves – and find their forever homes.

Photos of dogs by Molly Wald

Photos of trainers with dogs by Clay Myers