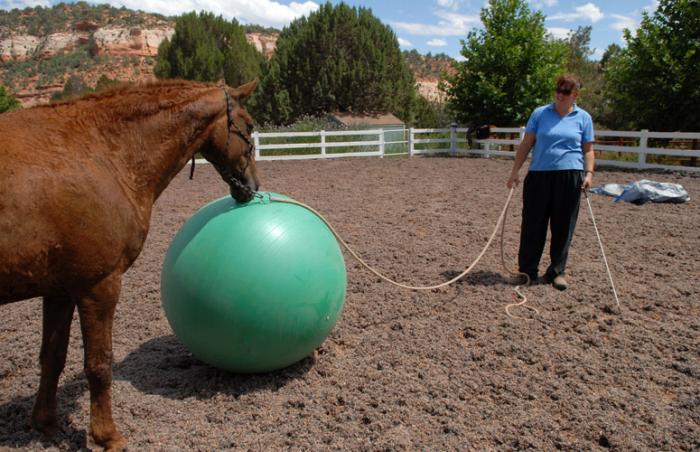 Creative enrichment for animals at Sanctuary

Caregivers at the Sanctuary are constantly coming up with clever, creative ways to ensure that the animals get proper nutrition, exercise, and mental stimulation. Though they may seem a little offbeat, all of the games and routines help enhance the animals' quality of life in interesting ways. 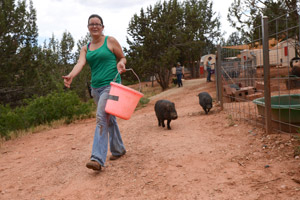 A new feeding method in the recently remodeled Marshall's Piggy Paradise capitalizes on the pigs' love of food. Caregivers place tasty fruits and vegetables in a large enclosure at one end of the pigs' living area. Then they open the gate and let the pigs run a few hundred yards from their enclosure to one containing the food. Once they have devoured the delectables, the process is reversed. Bowls in the original enclosure are filled with the pigs' favorite pelleted foods, which they rush back to eat. Visitors and volunteers get a kick out of the "running of the pigs," and the animals get exercise in addition to a well-balanced diet.

Music enrichment and aromatherapy for dogs: Lullabies and lavender

All day long, the puppies in Dogtown get plenty of socialization and love from caregivers and volunteers. And, when evening rolls around and activity in the puppy building winds down, the little ones are sent off to sleep with lullabies. Soothing tunes help keep them calm and comfortable until morning.

In Maggie's, a building in Dogtown that houses some of the behaviorally challenged dogs, caregiver Jacquie Bushway-Speer uses music to bring the energy level down at the end of the day. Most popular on the playlist is piano and Native American flute music, though Jacquie says that one of the dogs has a particular affinity for bluegrass.

Jacquie also uses natural essences, such as lavender, to give the dogs some scent therapy. Before or during thunderstorms, Jacquie puts a few drops of lavender on bandanas and places them inside the dog runs to help calm them.

Mixing it up with horse games, cat food puzzles, and enrichment for wildlife

Trainer Ann Hepworth engages horses in the "touch it" game - a variation of one of the Parelli Natural Horsemanship games. Focusing on an object (such as a water spigot, a lamppost, or a sign), Ann gently pushes the horse's nose toward it and sends them in that direction. When they find the appropriate object, and touch it with their nose or hoof, Ann rewards them.

According to Ann, it doesn't take the horses long to get smarter and braver about touching new things. And the activity helps horses learn how to follow suggestions from a benevolent leader, and to use the thinking (versus the reactive, emotional, instinctive) side of their brain. To prevent boredom, Ann often mixes it up by finding new and different objects for the horses to touch.

Caregivers in Cat World and Wild Friends also like to mix things up for the animals. Sometimes they move the cats' dishes around their rooms, which requires the cats to search a little for their food. If the cats have no vision problems, caregivers also move their furniture occasionally, creating a sense of newness akin to what you might get from rearranging the furniture in your own living room. 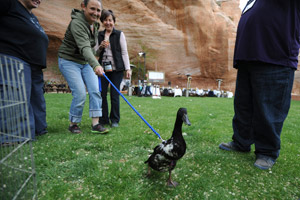 Wild Friends caregivers have harness-and-leash trained a rooster named Gandalf and a black runner duck named Amelia. They have also created "odd couples" by pairing off animals of different species who get along well together. For example, Amelia lived happily with yellow golden pheasant Phoenix  before she took on a new roommate - a young Pekin duck named Woodstock.

And these odd pairings, fun games, and food runs are just some of the interesting, creative ways of keeping the animals at Best Friends happy and healthy. There are many more, which volunteers and visitors to the Sanctuary can see in action every day.