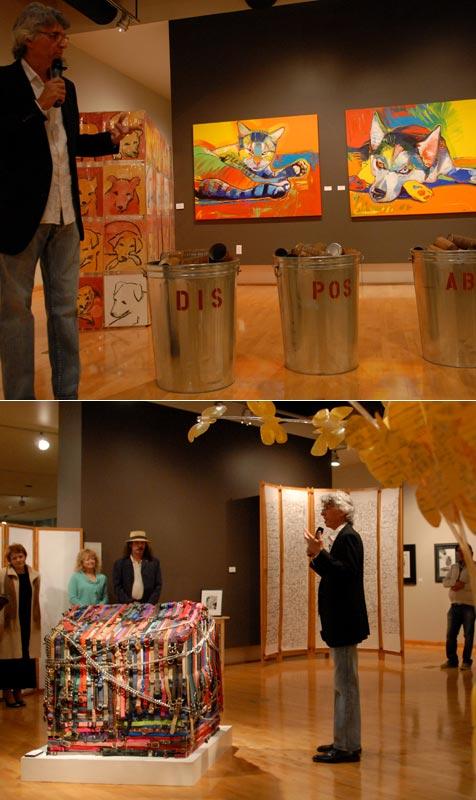 The Best Friends founder and artist had created the art featured on the bottles for the Vicktory Dog Wine Collection – portraits of the 22 Michael Vick dogs living at Best Friends – and he needed to get the images up on his own website to coincide with the announcement of the wine series.

He made it just in time, updating his site on October 29, the same day the Vicktory Dog Wine Collection story appeared on the Best Friends home page.

In hopes of selling prints of the Vicktory dogs’ portraits, Cyrus wanted to make sure people could see the original pieces. What he hadn’t planned on was selling all of the original artwork within a week.

"I had sold a few pieces before the wine collection was announced," he says, "but between last Wednesday and yesterday, all of the 22 original paintings have been bought. And I’m happy to say they all went to good homes."

Until yesterday, 10 paintings were still unsold, but a woman e-mailed Cyrus asking to purchase all the remaining pieces. "Of course I was thrilled," he says. "I think it’s wonderful that these images really connected with people."

Learn more about the Vick dogs

Prints of the dog paintings

And just like any time he sells his artwork, a percentage of the proceeds benefit Best Friends. Although there are no more original canvasses to purchase, prints of the Vicktory dogs are available for $50 each through Cyrus’ website.

Cyrus will also be the featured artist in Art for the Animals, a show dedicated to portraying cats and dogs as sensitive, intelligent beings. The show will be held in the Robert N. and Peggy Sears Art Gallery at Dixie College in St. George, Utah, about an hour and a half drive from Best Friends Animal Sanctuary.

He will be exhibiting The 575 Project, an art installation calling attention to the chilling statistic that 575 animals die each hour in U.S. animal shelters. The show runs November 12 through January 16. The opening reception is scheduled for 7 p.m. on November 14.