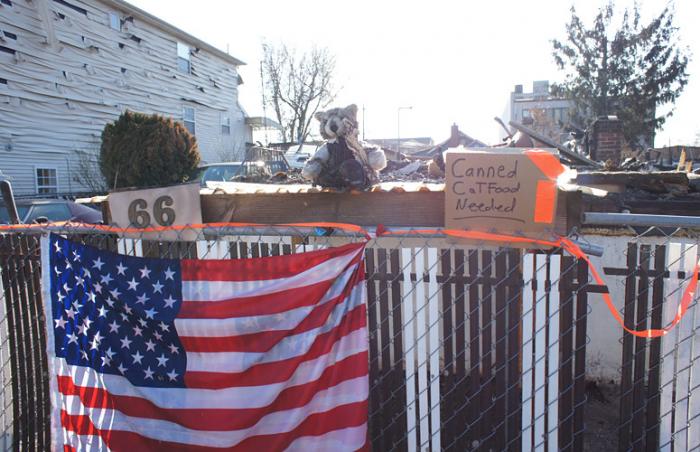 While the last of the FEMA temporary shelters have pulled out of the tri-state area, the families in need remain. Many have lost everything, yet they are ready to rebuild their lives. Best Friends is providing ongoing support to some of the hardest hit areas, especially Staten Island. By coordinating with Guardians of Rescue, a local all-volunteer organization, we are helping to ensure that those pets and people who require help are getting what they need. 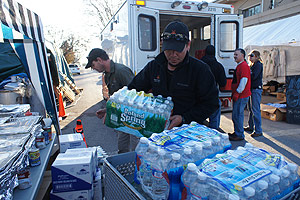 Over the Thanksgiving weekend, our New York programs and emergency response team were combing the Midland Beach and Hylan Boulevard area, giving individuals supplies, including over 1,000 pounds of pet food, 500 pounds of cat litter, blankets, bedding, community cat shelters, and, in some instances, trash bags and batteries. According to John Garcia, emergency response manager, “If a victim needs it and it’s on the truck, they can have it.” They also had Dr. Karen Dashfield in tow to address any medical needs that the animal victims might be facing.

“We’re going house by house, block by block, to make sure the families have enough supplies for their pets. The community has responded enthusiastically by telling us which homes have pets that could use some help, so we are continuously making the rounds to see that everyone who needs help is getting it,” shares John.

John describes what seems like a scene out of a movie: “There are people that have had their homes gutted and they are living on the top floor with no electricity. If we can ease the burden of feeding and keeping their furry family members warm, we are making a significant difference in their survival.”

Of the victims, community (feral and stray) cats seem to have been hit the hardest. Much of the support is going to help feed and shelter the cats who have caregivers, but even our most dedicated animal-loving colleagues are desperate to get basic provisions. 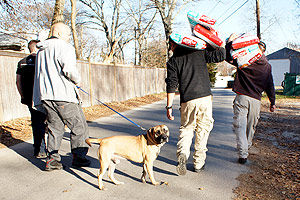 “There was one woman who was taking care of a number of cats, and she was out of cat food for three days when we arrived. She said, ‘I was trying to feed them people food, but they weren’t eating it.’ It is wonderful that our donors have made it possible for her to breathe easier knowing that help is here,” says John.

In addition to supporting community cat caregivers, the team is identifying where there are free-roaming cats and installing community cat shelters in safe locations. John described the gratitude of one caregiver who was watching 14 cats from displaced neighbors and was running out of supplies. The caregiver can rest assured that the cats will have fresh food and warm beds until their families can return.

Best Friends is also supplying in-kind donations directly to the local groups in need. Staten Island Feral Initiative (SIFI) was one of the first to receive cat food and litter. “Although our primary mission as an organization is TNR education and facilitation, the event of Hurricane Sandy called for us to reach out on a much larger scale, both to Staten Island’s pet guardians and to the caretakers of free-roaming cat colonies on the island. Through the incredible generosity of organizations like Best Friends, we have been able to provide comfort and assistance to the animals in our community,” says Elena Bass, founder of SIFI.

Over the weekend, Best Friends also donated over 600 pounds of pet food and 200 pounds of cat litter to a community relief distribution center.

Other means of support to help animals

Through our No More Homeless Pets Network, Best Friends is giving out micro-grants to organizations affected by Hurricane Sandy, including shelters that are facing devastating losses and the rescues that are pitching in to take animals. So far, two dozen groups and counting have received approximately $100,000 worth of funding. Places hardest hit like Bobbi and the Strays in Freeport, New York, and Liberty Humane Society in Jersey City, New Jersey, where loss of supplies and structural damage has obliterated their operating budgets, have received micro-grants that are enabling them to get through this difficult time a bit easier. Our staff continues to process grant requests at breakneck speed. 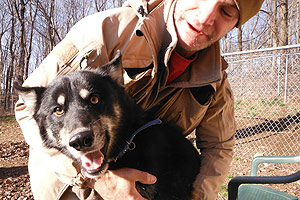 Transports are another way Best Friends is helping the homeless and at-risk pets resulting from the superstorm. Over 120 animals have been driven to facilities in New England where they will be adopted into loving homes.

Over in New Jersey, we’re helping put some muscle behind Monmouth County SPCA’s Home 4 the Holidays event being held November 30 to December 2. The shelter has offered respite for animals in need from heavily hit Ocean County. Their generosity has exponentially increased their pet population, and getting as many pets adopted during this holiday season is imperative. Through the No More Homeless Pets Network, Best Friends is helping them offer adoption specials thanks to a stipend to offset the reduced adoption fees, along with marketing support.

It is thanks to the Best Friends extended family that we are able to bring hope to the victims who have lost so much. We will continue to do all we can to help the animals in need and the people who love them.

In New England, adopt from a group that opened their hearts to a pet in need: