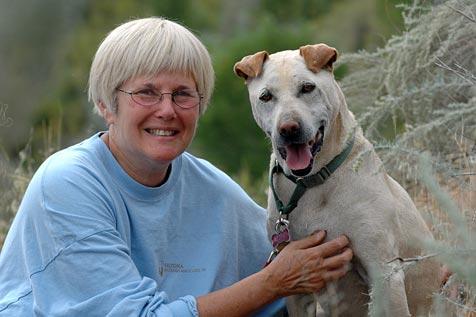 Good things come to those who wait. Your turn will come. Don’t worry, you’ll get the next one. Spencer the dog had heard all that and more during the 10 years he lived at the sanctuary, waiting for a home.

Well, all that patience finally paid off. He’s been adopted! Spencer’s forever family story began as so many do at the sanctuary. "I wasn’t looking to adopt…" Famous last words! There’s something in the water at Best Friends that can turn those exact words into an adoption application.

Joyce Rosenfeld was, in fact, not looking to adopt a dog. But she was looking for a doggie sleepover. "Is there anyone you can suggest," she asked while being nudged through the fence by some opportunistic pooch. Joyce turned around and found Spencer staring up at her. Yes, he had actually tapped her on the shoulder (more or less) when she’d asked for a sleepover dog. And the rest, as they say, was history.

Celebrations fit for a dog

Now Spencer is a bit of a celebrity at Best Friends, having been there so long. So he had a going away party at the sanctuary, and then a ‘welcome home’ party in his new home in Tucson, Arizona. Joyce says that he has joined the family perfectly. He and her greyhound, Mazel have developed an interesting game of catch-fetch. Basically, it involved emptying the toy basket and then throw the toys back and forth to each other. "Spencer is doing beyond fantastic," Joyce says. She can’t understand why nobody wanted to adopt him sooner. And she describes how he already behaves as if he’s lived there his whole life. Way to go, Spencer! You deserve it.