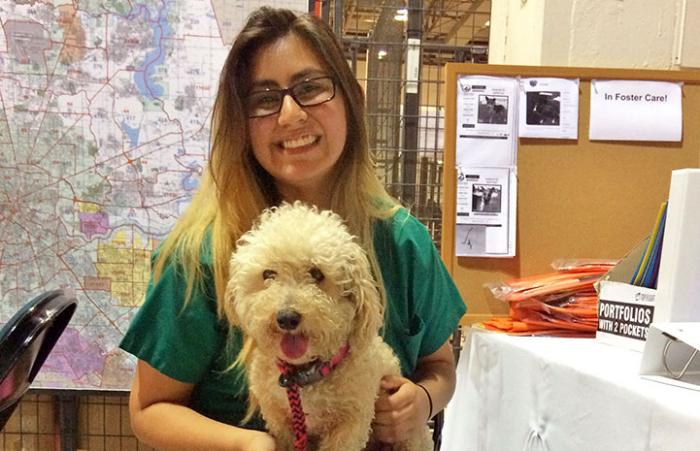 A “diggingest” dog finds his family after Hurricane Harvey

Yesenia Torres arrived at the Pet Reunion Pavilion at the NRG Arena with one furry face in mind: Buddy’s. She hadn’t seen him since Hurricane Harvey dumped torrential rains on a large area of Texas, which included her neighborhood. That’s when Buddy dug his way under the fence and disappeared. She’d spent many sleepless nights fearing the worst, until she finally saw that sweet face she’d been missing.

The Pet Reunion Pavilion is a partnership between Best Friends, Harris County Public Health, Austin Pets Alive, Houston Pets Alive and Houston Pet Set, and the goal is reunions like that of Buddy and Yesenia.

It’s impossible to say how many pets were displaced due to Hurricane Harvey, but there are more than 500 at the Pet Pavilion right now waiting to be reunited with their families — if they can be found. As reunions are starting to take place, pets once only identifiable by a number now have names, like Buddy. And each one has a story.

Buddy has a lot of energy, so when Hurricane Harvey hit and he was confined indoors due to torrential rains, he went a little stir crazy. Yesenia’s mom finally took pity on the five-year-old poodle and let him outside with his pals Rocky and Lucky. Not long after, Rocky and Lucky came back inside the house, but Buddy went missing in action.

Yesenia called her local humane society to ask if he’d been found, but with no luck. One day of Buddy missing turned into two, then three, and Yesenia started losing sleep. After a week went by with still no sign of him (either at home or on the lost pet forums online), she began to lose hope. Then one night as she was about to go to bed, she made one last scroll through Facebook. And there was a photo of Buddy.

That’s how she learned that Buddy had been found not far from Yesenia’s home and taken to Houston Pets Alive. Since then, he’d been moved to the Pet Reunion Pavilion in Houston. The next morning Yesenia was there, hoping the information was correct and that Buddy really was there.

A happy reunion and new microchip for Buddy

Keeley Floyd, who’s helping people find their lost pets at the pavilion, walked Yesenia through the dog kennels to look for Buddy. But the little poodle saw her before she could even make her way to him. “He saw her from two rows away and recognized her voice right away,” says Keeley.

When Yesenia approached Buddy’s kennel, he went nuts. “He started jumping up on his hind legs and begging to get to her,” says Keeley. Yesenia had finally found her Buddy. She noted that he’d held onto his picky eating habits even while away from home. “I knew for sure it was him when I noticed the treats in the back of his kennel,” Yesenia says. Two soft treats in the back of his kennel were untouched. “He won’t eat treats unless you break them up for him.”

That’s one mystery solved. The next task was to help ensure that if Buddy ever gets out of his yard again, his address and family information won’t be a mystery to whoever finds him. Buddy prepared to leave the Pet Reunion Pavilion with a brand new microchip, registered to Yesenia.

“I’m shaking I’m so excited to see him,” Yesenia said. Based on Buddy’s reaction, the feeling was mutual.