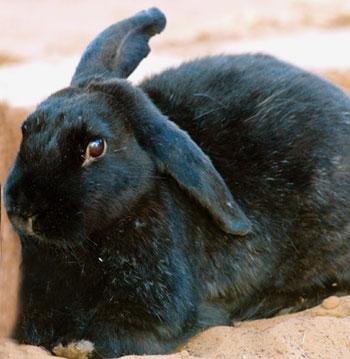 Do rabbits have nine lives?

Sammy the all-black rabbit has had at least four lives! He’s nine years old, which is getting up there for a rabbit, and he’s been living at the Best Friends greenhouse (yum!) with his best friend, China.

We all know cats have nine lives, but what’s the deal with this rabbit who seems to bounce back from everything? (Excuse the pun.) The first time he scared his caregivers was when his back legs started giving out. A very scary thing for a rabbit!

That’s when he was moved from the Bunny House to the organic greenhouse, where staff there agreed to look after him. A greenhouse just seemed like such a nice place for a rabbit to live that it ought to be good for his health. Maybe they were right. Soon, he was bouncing around again like a spry baby bunny.

Next, little Sammy had a stroke! No! Surely, this was it for him. But he got over that, too. And soon, he was back to hopping around the cool greenhouse, munching veggies once more with his little friend.

Next, he came down with an upper respiratory infection, and was rushed to the clinic. When he developed a head tilt from it, the greenhouse folks thought this time it was really goodbye! No more bluffing!

But Sammy straightened his head back up, got over his sniffles, and asked, "What’s everybody so upset about?" as he hopped right back to his green, breezy home.

Bunny who will live forever?

Don Gehre of the greenhouse thinks Sammy is going to hold on forever. He just isn’t ready to leave the greenhouse for the Rainbow Bridge – he would miss the vegetables too much.