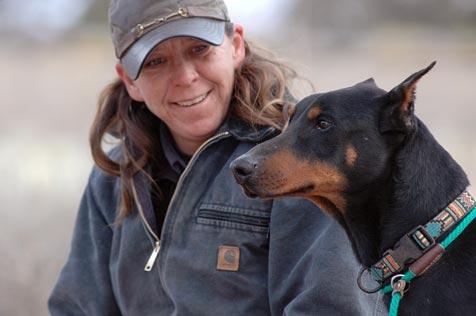 Doberman rescued from being killed

The only crime this Lebanon dog ever committed was getting lost in a basement. Sad to say, someone actually threatened to shoot Roofus because of it. Even sadder, that attitude is quite common where Roofus comes from.

Roofus had been alone, scared, and hungry for many days before finally ending up in that particular basement. He’d wandered in and couldn’t find his way out again. A man called and said that unless someone took Roofus out immediately, it was curtains. Joelle Kanaan from BETA (Beirut for the Ethical Treatment of Animals) responded to the call and showed up with nothing but some dry dog food and a leash. She had no time to bring anything else.

The man who made the call spoke to Joelle when she arrived. He tried to warn her about Roofus, claiming that the dog was aggressive, and offered again to use his gun on the animal if she’d like. After telling the man exactly where and how to use his gun (and not on the animal), Joelle crept into the basement and found a starving, terrified Doberman. It took only a few minutes to get Roofus to eat some food and to gain his trust. After that, she hooked up the leash and walked right out with this "aggressive" dog.

Aggressive? Hardly. He’s a lover, not a fighter! And as unassuming a guy as they come. At Best Friends, he somehow managed to wedge his paw between some fencing and a pole, trapping and injuring his paw. He didn’t cry out, didn’t fuss. Simply waited patiently for someone to come and help him, kind of like how, after all Roofus has been through, he’s now waiting patiently for a good home.

Find out about Dogtown, where dogs at Best Friends live