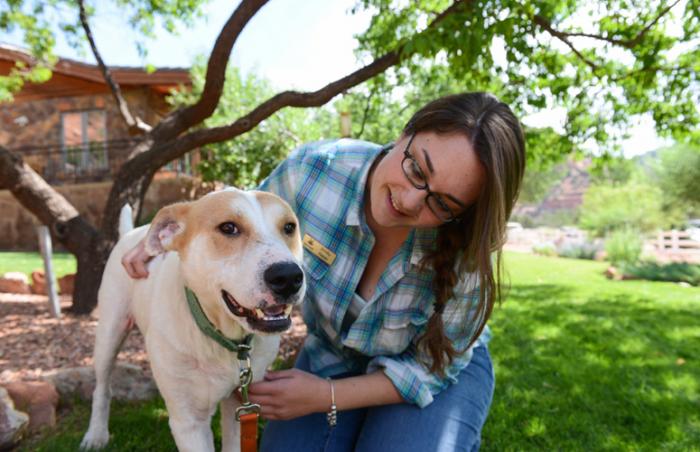 Dog with allergies finally gets some relief 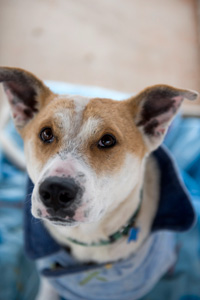 Anyone with mild seasonal allergies can probably relate to uncomfortable coughing and sneezing, as well as itchy, watery eyes. But allergies affect dogs differently. Instead of runny noses and sneezing fits, many dogs suffering from allergies itch all over. Elton was no exception. When he came to the Sanctuary last February, his body itched from the tip of his nose to the end of his tail.

A life of scratching for a dog

Unfortunately, Elton’s allergies are neither mild nor seasonal. His skin bothered him all year-round. When he came to Best Friends, he was three years old and had likely been suffering most of his life. Desperate for relief, Elton would scratch himself all day and night.

All that scratching took its toll. Elton didn’t even feel well enough to eat, and he was far too exhausted to run and play. His endless scratching had also caused a serious secondary skin infection that made him even more uncomfortable. His white coat was thin and patchy, and, beneath it, his skin looked red and angry. Poor Elton couldn’t enjoy being a dog when his whole life revolved around scratching.

A treatment plan for dog with allergies

Once he arrived at the Sanctuary, the first step in helping Elton feel better was treating his secondary skin infection. “Initially, he continued to scratch constantly no matter what therapies we tried,” says Best Friends veterinarian Christina Hansen. But eventually, Elton’s daily regimen of medicated baths and allergy medications, along with immunotherapy shots, began to help — at first a little, and then a lot.

Elton’s treatment had just begun when Best Friends staffer Emily Neer started taking him to her office in the Best Friends Welcome Center. Although Elton was adjusting perfectly well to life in Dogtown, his caregivers feared that the desert sand, which covers most of the yards in Dogtown, might irritate his delicate skin. Even if that wasn’t the case (his biggest allergy triggers are bayberry and dust mites, not sand), Elton’s office days became a fun part of his treatment plan. 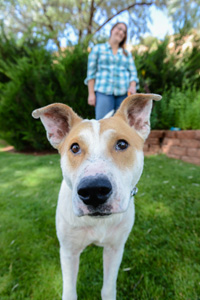 It didn’t take long for him to charm Emily. “Even when he was itching all the time and was so uncomfortable, he was still the sweetest dog,” she says. “He just has an amazing personality.” Elton spent his lunch breaks meeting and greeting Sanctuary visitors, volunteers and staff members who dined on the Welcome Center patio. He never failed to make a new friend, or to (politely) beg a treat. Finally, he was interested in something besides scratching.

That’s when Elton got his big break: Emily took him home as a foster pet. He’d still get his medicated baths, allergy medication and shots, and then come to the office with Emily while she worked. This way, his caregivers and veterinarians could see how much he’d improve in a home setting.

Feeling much better after allergy treatment

Elton loved that idea from the start. He fit right in with Emily’s dog and three cats, and he was the perfect houseguest. As his treatment began working better, he also began to show more of his wonderful personality. Elton began sleeping more and scratching less. As Emily says, “He started to get a spring in his step.”

Elton will have to deal with allergies for the rest of his life, but his treatment is helping him get better, and has put him on the road to feeling his best. And now that he’s no longer miserable, he jumps in the air and barks for joy whenever Emily takes his leash out. For the first time in his life, Elton’s excited about the simple pleasures of just being a dog.

To bring hope and healing to more animals like Elton, support our work.