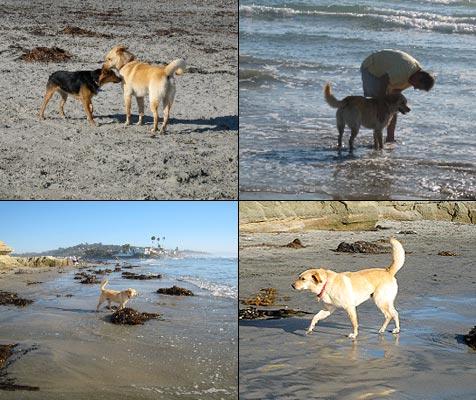 There are many advantages to living in a rural area. Lack of stoplights, for one. Also, really cool stargazing opportunities.

Of course, there are also some downsides. When Don and Pam Dubin wanted to fly their private plane from California to Kanab to adopt a Best Friends dog, they hit a tiny snag. There are no car rental companies in Kanab, Utah, home of the sanctuary, so they had no way to get from the Kanab airport to the sanctuary. No problem, though. Best Friends’ Welcome Center came to the rescue!

The folks at the Welcome Center had to head into town to fuel up a tour van. They offered to swing by the Kanab airport to pick up Pam and Don. And really, when you learn which lucky dog ended up going home with them, a ride to the sanctuary was the least they could do.

Magic the dog lost his home after getting a little overprotective and nipping some people he didn’t think should be around. He was only a year old when he came to Best Friends five years ago. Because of his past, he had to wear a red collar at the sanctuary. That meant he required extra care and supervision. All that aside, his caregivers loved him to pieces. During the whole five years Magic lived at the sanctuary, he never showed that kind of aggressive behavior. He’s always been quite the affectionate pooch.

Even so, many people find a history like that hard to overlook. Not Don and Pam, however. They actually try to find difficult-to-place dogs, because they know they can help them. For a while, they’d been working with the adoption staff at Best Friends to find a good match. When they laid eyes on Magic, they were smitten. His background didn’t faze them for a second.

Taking their dogs in their airplane

Their dogs are true family in every sense of the word. They fly around with them in the family plane, go on long hikes together, and hang out at the beach all the time. These dogs have it good! All the while, Don and Pam work with the dog at a slow, encouraging pace to get past any issues. The last dog they adopted from a shelter took two years to get over all the hang-ups and bad habits. So they aren’t afraid to take time.

With Magic, though, he may not need quite so long. He’s such a good boy already! When he met other dogs on a hiking trail, he behaved like a true gentleman. And when Magic first met the cats at his new home … well, OK, he barked. But Pam and Don aren’t worried. They know he’ll get there.

In the meantime, he’s sure enjoying his new digs. Congrats, Magic! We’ll try to rig up a car rental service next time you’re all sailing over and want to stop in for a spell.

There are so many more animals with special needs hoping for their chance at a home! Check them all out on our Adorable Adoptables pages.