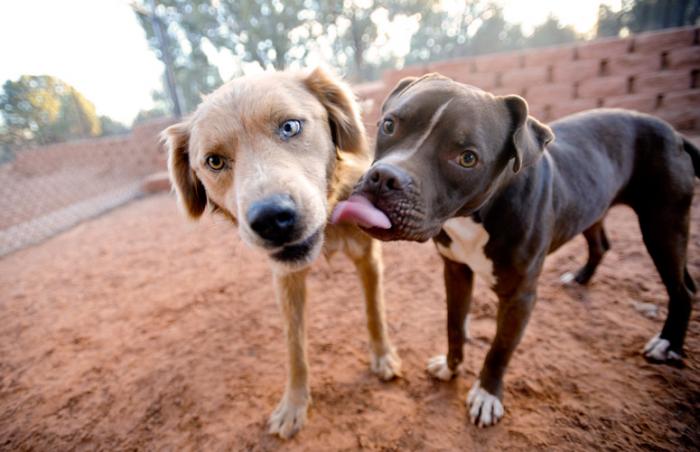 The first few years of Alamo's life weren't so wonderful, and his future was uncertain. Because he was a pit bull terrier in a bad place, some people dismissed him as one of "those dogs." But all that changed after he was rescued in a dog-fighting bust and brought to Best Friends Animal Sanctuary.

Although it seems unlikely that Alamo himself was forced to fight, he was unsocialized and awkward. He was fearful and skittish around new people, and, though he was two years old by the time he came to Best Friends, he'd had no training whatsoever.

Learning how to be a dog

During his time at the Sanctuary, trainers and caregivers in Dogtown worked hard to teach Alamo how to be a dog. Caregiver Kathy Moore describes the clever solution she and the other caregivers came up with when they realized that Alamo had no idea how to go through a doggie door. Using treats, they encouraged him to go through a Hula Hoop. At first, they kept it really low to the ground, then they raised it bit by bit, and finally they helped him transfer his new stepping skills to the doggie door.

Alamo learned to strut through doggie doors like a pro, but he was still unsure of many things. For example, he would duck when he saw an unfamiliar object coming toward his head. To introduce him to "scary" new objects, and to prove that they wouldn't hurt him, his caregivers used a Flirt Pole (a long pole, with a cord attached, from which toys and other items can be dangled). 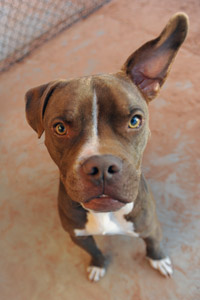 A puppy at heart

According to Kathy, Alamo could be a mischievous pup, though getting mad at him was difficult. "He had the most adorable mischievous look, where one of his ears flipped up and he showed his underbite," she says. "Then I knew he was about to get into trouble."

It's true that Alamo still has a few things to learn (like the fact that shoelaces are not designed for his chewing pleasure). But he's a quick study and always eager for learning opportunities. Besides excelling in basic training, he discovered that food puzzles provide entertainment and tasty rewards.

Alamo's good-natured way with other dogs also meant that he could have run mates and playdates. He even befriended a shy dog named Mocha Too, whose confidence he helped build. Like many of the dogs in Dogtown, they helped each other out.

While overcoming his own anxieties, Alamo also worked to defeat the negative stereotypes that surround dogs rescued from fighting rings. Besides being so adorable, he has an infectious personality. He is a confident, smart, sweet and curious boy. "It was just so nice to see his progress," exclaims Kathy. "He is a great example of how much potential dogs in his (former) situation have!"

In fact, Alamo was so loving and so good with people that he was "hired" as the official greeter for tours that came to Dogtown. His job was to teach people that dogs with difficult pasts can turn out to be every bit as amazing as he is. 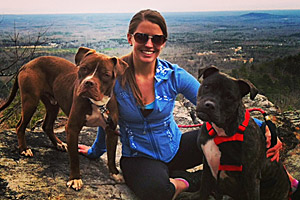 His good work was rewarded when Heidi Spillane of North Carolina decided to adopt him. Recently, Alamo flew home to her and his new doggie sister, Saedy. Heidi says that he is enjoying the great outdoors, and that he was so tired from a recent hike in Crowders Mountain State Park that he fell asleep sitting up! It sounds like Alamo is already settling in to his new life as a beloved pet.

To learn more about Best Friends' outreach work to help pit-bull-terrier-type dogs, read about our pit bull initiatives. Also, get involved and help become a voice for the animals through legislation in your community.