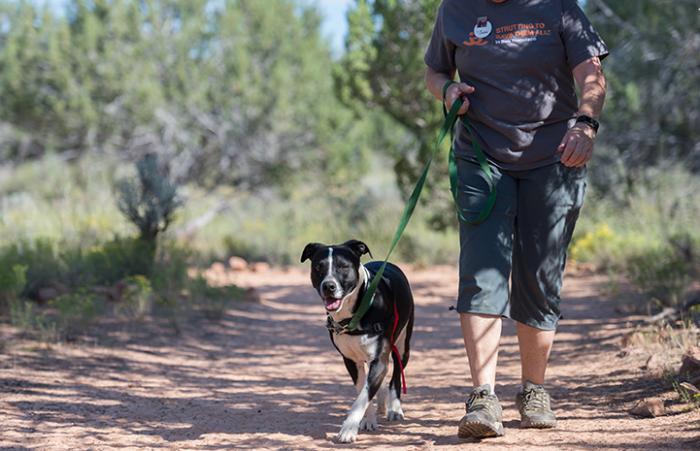 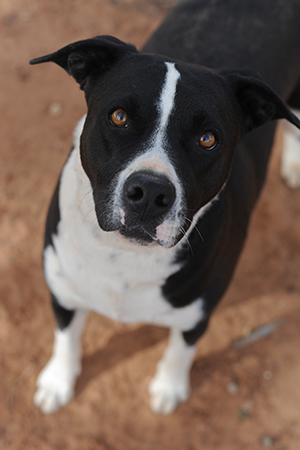 If you wanted to meet Danica in the first few months following her arrival at the Sanctuary, you might have had to stop at hello. The pretty black-and-white lab mix wasn’t keen on introductions. She’d often bark at strangers through her gate, acting frightened, aloof and defensive. She had an especially difficult time meeting men, and Dogtown caregivers had to carefully match her up only with volunteers she felt comfortable with when she went out on walks.

Being shy and fearful with strangers isn’t an uncommon challenge for dogs at the Sanctuary. While some dogs may have had negative experiences with people, it’s often the case that the dog simply hasn’t had enough socialization.

Danica was already two years old when she came to the Sanctuary from a Best Friends Network partner shelter in Colorado. No one knew how well she’d been socialized during the critical puppy socialization period (roughly between three and 16 weeks of age) or what kind of experiences she’d had with people during the early years of her life.

Dogtown trainers and caregivers did know that they could help Danica by slowly exposing her to new people and showing her she had nothing to fear. Melissa Pezzuto, Dogtown behavior consultant, says: “With dogs like Danica, we do a lot of counterconditioning. It's essentially changing their emotional response about a person or object. We do this by pairing good things the dog wants (like food or walks) with the ‘scary’ thing. So, having Danica go on walks and being fed by new people helped her overcome that fear.”

Learn more about training and socializing your dog

Weight loss for a dog

While she worked on her social skills, Danica faced another challenge: She needed to lose some weight. She was just over 72 pounds when she arrived at the Sanctuary this past October, and her ideal healthy weight is somewhere around 55 pounds.

So Danica started a regimen of healthy dieting and exercise, and began to shed the extra weight. Soon, she began looking and feeling better. That wasn’t much of a surprise. But there were other changes as well. First, Danica became far more excited about life. She started to enjoy running around at the dog park and playing with soft toys.

As it turned out, Danica’s physical condition had a big impact on her behavior. When she became healthier on the outside, it was as if her spirits were suddenly lifted and she found her hidden confidence.

“When dogs are in better shape, they tend to deal with stress better — not unlike humans,” says Melissa. “When we look at undesirable behavior, we always look at medical issues and wellness first, so it could be a case of her feeling better and more confident.”

The biggest transformation in Danica’s behavior is how she reacts to strangers. She has finally let down her guard, and now she greets people happily and enjoys spending time with volunteers.

Danica is now down to 56 pounds — extremely close to her ideal weight. It’s easy to see the physical change and her increased energy. The behavioral transformation, while a bit of a surprise, is equally amazing. “She’s really taking off now,” says Dogtown caregiver Jess Cieplinski.

Once Danica’s body was healthy, her true personality rose right to the top. If you want to meet Danica these days, you’ll likely be greeted with a happy smile and a tail wag. And if you take her out on the Dogtown trails, you’ll see a brand new spring in her step. 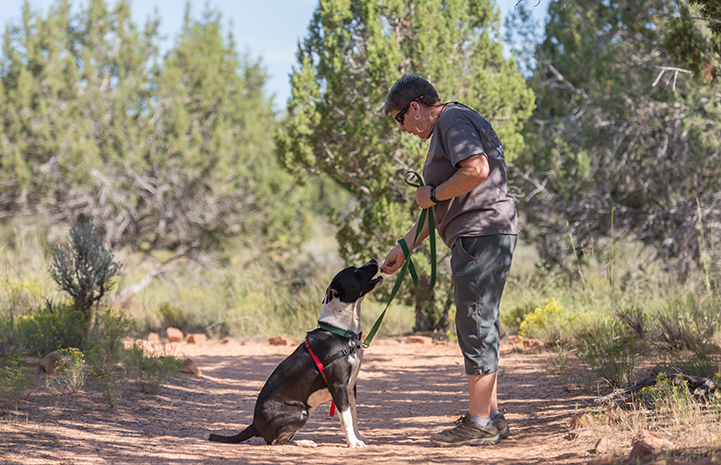