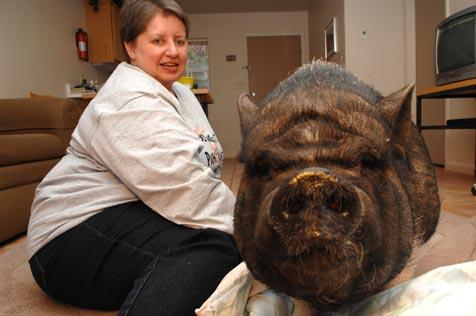 Sleepovers can be dangerous business for those who don’t think they want to adopt another pet. Proceed with your own caution! Just ask Raisin the pig. On her very first crack out of the barrel, Raisin found a home! That’s the power of a sleepover.

Now, by all signs, it looks like Cherry the pig is hoping to follow in Raisin’s footsteps as soon as possible. She’s already melting hearts!

Lorri Francis of Chicago was out on her first-ever visit to the Sanctuary. Lorri, a self-described "dog person" through and through, had every intention of spending most her time with the dogs, and that included taking dogs on sleepovers. That all went out the window once she dropped by Piggy Paradise, the pig part of the Sanctuary.

She was smitten instantly! Lorri cancelled her volunteer appointment up at dogs (no worries, they had plenty of others that day) and stayed instead with the potbellied wonders of the west. After taking Sprocket for a sleepover her first night, she was determined to find a dog the next night. But no, the pigs weren’t done with her yet.

Taking a pig on a sleepover

Once Lorri met Cherry and learned she was being considered for the sleepover program, she offered to help out. Lorri was staying in one of the Best Friends cottages and graciously offered to let Cherry come hang out for a few hours — there went another dog appointment down the drain!

These types of outings are a big deal for the pigs. For a pig who has never walked on tiled floor or wooden decks, such human-designed trappings can seem quite intimidating. Sure enough, Cherry wanted nothing to with all that crazy human domestic dwelling stuff at first. Yet Lorri came prepared. Armed with a bucket of popcorn and "pig newtons," she soon convinced Cherry the accommodations were not so scary after all.

You know, sometimes a plan can work a little too well. Cherry was so enthralled with the setup that Lorri offered to keep her the whole night. This would be Cherry’s first ever sleepover (sorry dogs, better luck next time!). The pig caregivers were thrilled and cleared Cherry for the night.

You’d never know, though, that this was her first overnighter. Cherry behaved like a well-seasoned sleepover veteran. She cuddled up in her tent and blankets and snored the night away. And during that short time, she managed to wrap herself around Lorri’s little finger. "I love her!" Lorri says. "If I could take her home, I would."

So yes, Cherry is now officially on the sleepover circuit. But if she keeps winning over hearts at that rate, it just may prove to be a short-lived career. Once again, proceed with caution all ye would-be sleepover volunteers.

Read about pigs as pets.