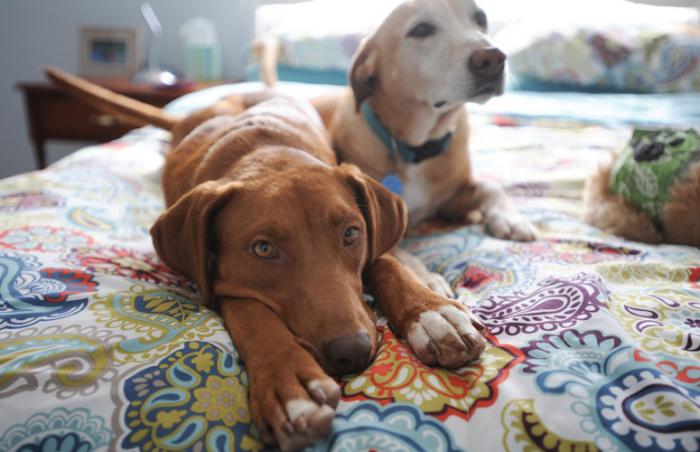 Dog with mange and ehrlichiosis gets help

When she arrived at the Sanctuary, Amber was a scrawny, long-legged dog dancing nervously at the end of her leash. The young, red dog needed to be vaccinated and spayed, and she was in bad shape in more ways than one. She had been living as a stray; was too thin; had a large, open wound on the top of her head; and had sore, itchy skin. She was a mess.

Healing for dog at Best Friends 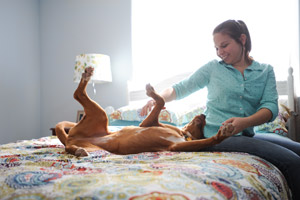 Soon after coming to the Sanctuary, Amber was fostered by Best Friends staffer Carrie Smith. Scared and submissive at first, Amber cowered when Carrie reached for her. But, despite her apprehension, Amber’s mantra seemed to be “never stop wagging.” Her tail kept going a mile a minute.

The Best Friends veterinary team got Amber feeling better by treating her for mange and ehrlichiosis, a tick-borne disease. Once she began to recover, her true, youthful exuberance surfaced. Only a year old, she was still a goofy puppy who loved to go hiking and for romps at the dog park. She was ready to put the past behind her and move on.

Dog adoption that was meant to be

Sometimes you just look at something – or someone – and know it’s meant to be. That’s what happened when Kari Padon saw Amber’s picture on the Best Friends website.

Kari had recently adopted a puppy from the Sanctuary, and she wanted a playmate for her. When Kari saw Amber’s picture, she felt an immediate connection. “There was just something about the look on her face,” Kari says. “Something told me ‘this is the one you need.’ ”

Carrie took Amber to Las Vegas to introduce her to her potential new family. Carrie says, “Kari and her father have four dogs, and their life revolves around them. They go hiking and running, and splashing around in kiddie pools in the backyard.” 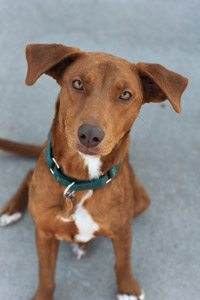 Amber fit right into that life.

Kari says what most impresses her about Amber (now called Réz) is her “true grace. There is nothing about life that she’s not excited about. She sleeps on her back, with her paws in the air, and can't wait for you to wake up and rub her belly every day. It gives you a different perspective on life.”

Despite all she suffered in the first year of her life, Réz remains trusting and loving with people. She can't wait to meet someone new, to play with them, and get affection and pets. Her “unmatchable drive for life” is a constant inspiration for Kari in dealing with her own painful past. Kari explains, “There’s just something about (Réz) that makes you get up in the morning and say, ‘Today is going to be a good day.’ ”

Learn about all the adoptable dogs at the Sanctuary.