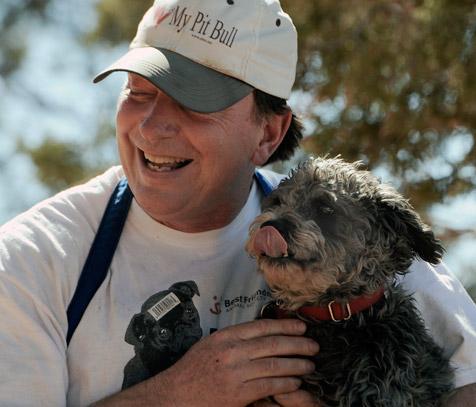 Dog with reputation for disliking men

As Best Friends caregiver Tom Williams scoops up Gordo the terrier mix, cradling and giving him belly rubs while Gordo stretches up to give kisses, it’s hard to believe Gordo came to Best Friends a few months ago with a reputation of not liking men. "He was advertised as a little ball of man-hate," Tom explains with a smile. Looks like Gordo wasn’t exactly what everybody expected.

Three-year-old Gordo came to Best Friends from the Humane Society of Utah in Salt Lake City, where he had earned quite the name for himself. He’d been returned from a home where he had bitten an adult male adopter. Back at the shelter afterward, he bit one of the male staffers. Not much is known about the circumstances.

Socializing a dog who had bitten men 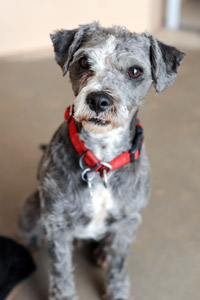 Gordo came to Best Friends looking for a second shot. His past behavior was taken into careful consideration. Accordingly, Gordo was designated a staff-only dog. Caregivers took special care around Gordo to never do anything that might upset or startle him. Tom, his only male caregiver, was especially cautious.

But here’s the thing. Since day one, Gordo has been nothing but golden toward people. "He warmed up to me right away," says Tom. "I could pick him up, I could hold him, turn him over, rub his belly, leash him, walk him, no trouble whatsoever." Clearly, Tom could connect with Gordo. But could other men?

"We’ve been working real hard with him," Tom explains. Gordo has gone for walks around Best Friends, meeting other staff members, male and female. He’s also been on golf cart rides to other animal care areas, and has acted the perfect gentleman each time. He’s one of the sweetest dogs you could hope to meet, actually.

Training for a terrier mix

In one way, though, Gordo showed some challenging behavior in the beginning. When strangers approached his play area, Gordo displayed a little barrier aggression. Caregivers started dealing with that little hang-up right away. They began asking as many different people as possible, staffers as well as volunteers, to approach the door to Gordo’s play area. 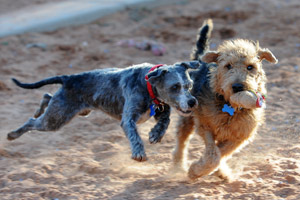 If Gordo displayed polite behavior, he received a treat. He caught on in a flash. In a few short months, Gordo’s barrier aggression has all but disappeared. He practically grins when anybody shows up now. "He’s really getting good at it," Tom says.

He also has fantastic dog skills. Gordo lives with Decker, another terrier mix. The two of them play and wrestle all the time.

It’s hard to say what might have provoked Gordo in the past. So, for now, Gordo remains a staff-only dog. However, the goal is to keep working on developing his already good manners. In time, he’ll receive a new assessment. And if his excellent behavior thus far with people and other dogs is any sign, Gordo should sail through that assessment with flying colors.

And then he’ll get to hand out kisses to anybody he wants.