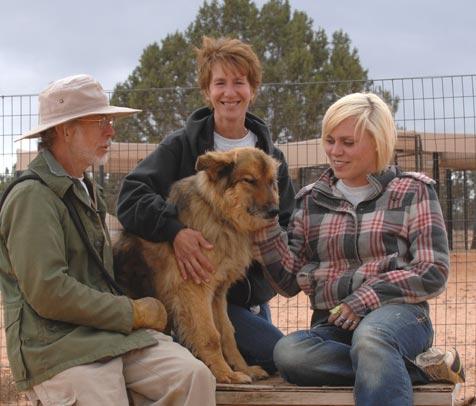 Dog very gradually letting down his guard and trusting a little

Ten years ago, a family found a stray dog and wanted to welcome him into their home. But Blitz, as he became known, wasn’t having it. People were not his friends, not by a long shot. After it was clear he didn’t want to be part of a family, the family contacted Best Friends for help. Space was available, so he came to the sanctuary.

Often a shy or scared dog can open up with a little patience and TLC. Not with Blitz, though. Something hard-wired into his brain convinced Blitz that people could not be trusted, not even a little. Blitz wouldn’t even go inside his dog building during bad weather if people were in there. As weeks turned into months and months turned into years, his caregivers started to fear he might never want a people friend. Heck, it took four or five staffers just to put him in a crate when it was time for medical exams. So-called "normal" activities like games or walks were not even on the radar.

Letting down his guard a bit

Then he started to act a little strange. Well, strange for Blitz. He began to come indoors more often, and wouldn’t run off when his caregivers approached. He still didn’t want to be touched, yet he almost seemed to want their company. Sort of a long-distance relationship, Blitz-style. He set the terms, and his caregivers kept them.

If that wasn’t weird enough, one day Blitz decided to try something even crazier. He jumped up on his doghouse and stared at the caregivers with obvious intent. "Can’t you guys take a hint?" he seemed to say. The thing is, this was a hint 10 years in the making. He wanted them to pet him.

So … they walked over and petted him. He stood still and soaked it up! After a few weeks of this, the caregivers got to thinking: Would Blitz be OK on a walk? For a full decade, the concept of taking Blitz on a walk was like saying you wanted to fly to the moon with some duct tape and a handful of helium balloons. Not happenin’. Still, Blitz had been changing the rules lately. They wanted to try.

In this new phase of his, when Blitz wanted attention, he’d hop up on his doghouse. That was his comfort zone. So they waited until he hopped up and then they attached a lead so he could drag it around the play area and get used to the thing. Again, no problems.

Another milestone: Taking dog for a walk

A couple days later, his caregiver, Mileen Keating, tried a walk for real. Blitz went right along! Mileen couldn’t resist picking up her radio and sending out the notice. "Guess who I’m taking on a walk?" she said to her fellow caregivers. "No way!" was the reply. After 10 years of trying to hide in the corner, Blitz finally decided there might be something worth checking out around the bend after all. Congrats, Blitz. You’re an inspiration to us all.

Have a shy dog of your own? Learn more about dog behavior and care in our online resource library.

All of these transformations and happy endings are made possible through your support of the animals. Thank you!