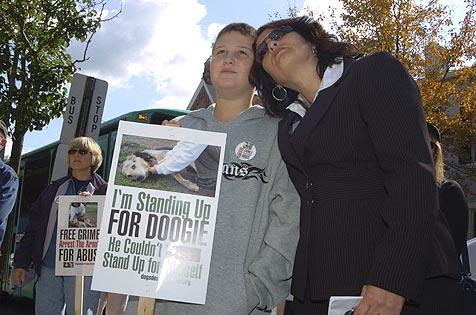 Dogs Deserve Better founder Tammy Grimes, who was convicted of theft and receiving stolen property for taking a neglected dog from his yard for medical care, said she will refuse to pay monetary penalties. Instead, she has asked the judge to sentence her to jail because it will help her "maintain a clear conscience."

Grimes, a prominent anti-tethering activist, is scheduled to be sentenced February 22 by Blair County judge Elizabeth Doyle in Hollidaysburg, Pennsylvania. A jury on December 14 found her guilty of the two misdemeanors.

Since the trial, Grimes has been critical of the judge and district attorney Richard Consiglio, both of whom, she says, "railroaded" the jury into a conviction.

Grimes said she expects to be ordered to pay a fine and court costs – perhaps around $1,200 – and possibly be sentenced to community service and probation.

"I am morally and ethically unable and unwilling to pay any fine that goes to pay the salaries of those who use power wrongly," she wrote. "Those who punish citizens for helping animals and allow animal abusers to go free will not receive monetary support from me."

The case arose over Jake, a 19-year-old dog living in the backyard of Steven and Lori Arnold, according to the Altoona Mirror. A neighbor told a representative of Dogs Deserve Better that the dog was lying in the Arnolds’ yard for three days, unable to move and without food and water.

On September 11, 2006, Grimes removed the German shepherd mix – whom she renamed Doogie – from the yard and later took him to a vet for treatment.

She said she never intended to deprive the Arnolds of their dog, but she refused to return the dog to authorities. She insisted that they investigate possible animal cruelty charges against the Arnolds.

Instead, Grimes was charged with theft and receiving stolen property.

Meanwhile, Doogie was spirited away to an unidentified foster home, where he reportedly thrived for a while before dying peacefully on March 1, 2007.

After the charges were filed, Best Friends sent a letter to the court and prosecutor offering to accept the dog at our sanctuary, where he would receive medical treatment and a place to live. The letter also decried chaining dogs and offered to supply a model ordinance to ban tethering. Best Friends representatives also organized a rally in support of Grimes and Dogs Deserve Better.

Fighting for better laws for dogs

"I strive very hard to obey all laws that seem fair and do not cause harm to others," Grimes wrote. "I stop short of obeying any law that would force me to watch a dog die in the dirt just because he is considered mere property of another. I will continue to fight for better laws for man's best friend, as well as shine a light on the current lack of enforcement of existing cruelty laws."

In declaring her choice of incarceration over paying the fine, Grimes quoted Martin Luther King, Jr., "Non-cooperation with evil is just as much a moral obligation as is cooperation with good," and Henry David Thoreau, "Under a government which imprisons unjustly, the true place for a just man is also a prison."

Photo of Tammy Grimes and son compliments of the Altoona Mirror

The work of Best Friends is possible only because of your generous support. Click here to help more animals.