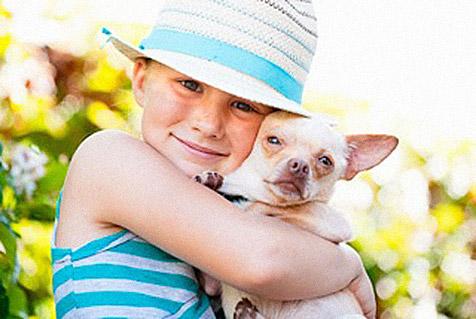 The situation was dire. A backyard breeder in the tony Woodland Hills area in California had over two dozen small dogs with various issues. Some had been born with crippling birth defects, some were emotionally shut down as a result of their living conditions – all were in need of rescue.

In June, Anna Peries, founder of Ashley and Hobie, an animal welfare organization, and part of the Best Friends extended family of volunteers, hit the ground running to get these dogs placed. Enter Sarah Sypniewski, founder of NinjaDog Concepts, who created a dedicated Facebook page to promote the dogs, which she continues to maintain.

"There were 27 dogs accounted for, and the immediacy of networking and setting up the Facebook page saved their lives," shares Robin Harmon, Best Friends Pup My Ride coordinator and an animal advocate in Los Angeles for over a decade. She went with Gayle Alexander and Jessica Cliver to take some of the dogs. Jessica took in a blind and deaf senior, and working through Los Angeles Animal Services, Best Friends helped place six of the dogs: Merlin, Muno, Chewy, Taffy, Toto and Oreo. (All of them are currently spoken for.)

Carmella Hardy was visiting her family in Germany when she got wind of Merlin. She didn’t know if she’d be back in time to help out, but she really wanted to give fostering a try.

"I saw his picture and heard about the story and wanted to take Merlin," explains Carmella. "He has transitioned into our home beautifully. He follows our Labrador, Lola, around, and they even sleep together on the bed. It was my husband who said, ‘We’ll keep this dog,’ because he’d gotten so attached." (Merlin is pictured above with his newest sibling.) 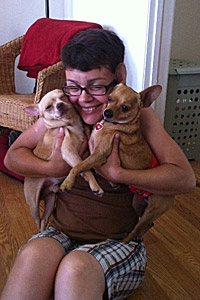 Fabiana Passos also saw Merlin’s photograph and was interested in fostering him. Jill Gasparac, another person rigorously networking, and who is also currently housing some of the dogs, let Fabiana know that Merlin was in foster, but what about Muno?

Fabiana was a would-be first-time foster and wasn’t sure how fostering would work out. But she needn’t have worried. Muno has settled into her home and loves his human mom and Chihuahua brother Max. He bonded quickly with Fabiana, and she shares that his walks can last up to an hour just to get around one block. "He just loves to inspect and roll in every patch of grass," she says. "It’s like he’s discovering the world for the first time."

The third first-time foster to come forward to make a difference was Lori Suarez. She saw an article online and kept going back to the Facebook page maintained by Sarah. She had never had a small dog, but there was something about Chewy that made her want to give fostering a try. She tried and failed — Chewy has found his forever home with her.

"When Chewy was first dropped off at our house, he was really scared," says Lori. "I bring him to work with me to bond, and it’s working. He loves to snuggle with me, and he likes to initiate play with Molly (their older dog). Although, he’s still afraid of men." Since bringing Chewy home, Lori’s husband, Steve, has been feeding Chewy his meals and sneaking him people food off his plate to help him open up and trust. 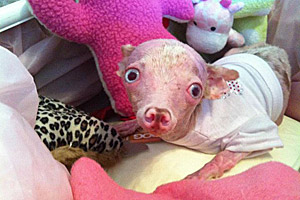 One of the dogs in need of the most care is Rosie. Her laundry list of medical issues could have been prevented had her owner not been so reckless regarding her breeding program.

Who would want to take on such an animal? Cinnamon Muhlbauer is the type of person the phrase "salt of the Earth" describes. Anna knew this and reached out to her right away. Cinnamon has two Chihuahuas, Charity and Gabriel, who get around with the assistance of wheelie carts. Her words on the subject: "So they need a little more care, so what?"

Cinnamon has taken Rosie in and is getting her the medical treatments she needs. She has also set up a Facebook page to share her journey.

"Rosie’s story is so inspiring, and she’s captured the attention of people from around the world. She’s got over 20,000 fans on Facebook, and I get hundreds of emails a day from people wanting to know how she is doing and wish her well. She’s also got over 30 dresses, seven beds, a handmade collar, and bags and bags of toys from all over the world. I am so grateful to all the folks that have shown their support. I could not give her the care she is getting without them."

Rosie and all the dogs rescued from Woodland Hills continue to educate people about the horrors of backyard breeders, but they are also educating people about hope, forgiveness, compassion and love.

These are some of the organizations that have helped these dogs:

Find out more about the dogs from Woodland Hills who still need help.

To learn more about Rosie, go to Everything Rosie.

For further ways you can help realize a No-Kill Los Angeles (NKLA), go to NKLA.org.

Photos by Cinnamon Muhlbauer, NickCarranza and courtesy of Fabiana Passos and Carmella Hardy