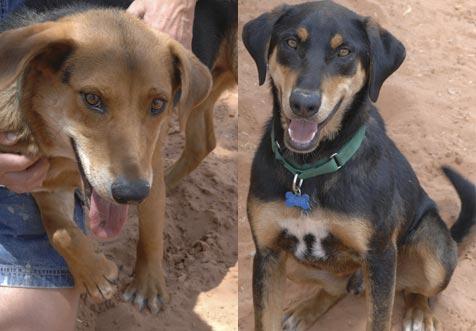 McGee and Gibbs, two dogs named after detectives on the TV show NCIS, discovered that sometimes it’s downright stinky to get up close and personal … especially with the wrong end of a skunk!

They were stray dogs who were found (and smelled …) in the wilderness not far from Best Friends. Somehow or other, these two carried their detective skills a bit too far and paid the price. By the time the dogs were admitted to the sanctuary, the groomers knew they had their work cut out for them and then some.

Remedies to get skunk smell off dog

Man, talk about an effective weapon. It’s a wonder skunks aren’t king of the jungle. Ever try de-stinking a dog that’s been skunked? Opening eight zillion bottles of tomato juice and rolling up your sleeves with a clothespin over your nose is no picnic. On that note, here’s a tip in case your own dog has a sleuthing mishap: Tomato juice doesn’t really work.

And the groomers discovered something else that didn’t seem to work. They tried a specialized pet shampoo, designed for de-skunking, and it did nothing! The groomers gave each dog a bath in the natural enzyme rinse and somewhere in the distance a skunk laughed.

Lucky for Gibbs and McGee, somebody at Best Friends had just gone through this recently with his own dog. He’d found a formula that worked for him, so he passed it on to the groomers. What the heck, they figured. Worth a shot! This particular cocktail is a mixture of hydrogen peroxide, baking soda, and liquid dish soap. Sounds like an elementary school science-fair project in the making, but it really did the trick! The two dogs are now free to chase crime without the risk of blowing their cover a mile off.

They’re also free to melt some hearts, and they will. These two young dogs are as friendly as they are good-looking. Welcome, you two. We all feel a bit safer with a couple of kissy detectives hanging around! Just try to avoid black cats with white stripes from now on. They’re not worth it.

Read a story about two dogs who tangled with a porcupine.

Photo of McGee (l) and Gibbs (r) by Gary Kalpakoff