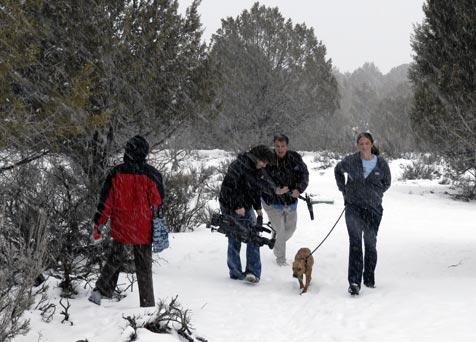 ‘DogTown’ series on National Geographic to return this summer

The 22 Michael Vick pit bull dogs now living at Best Friends Animal Sanctuary have won the hearts, minds and microphones of media across the country.

First, it was the Vicktory dogs’ version of "Meet the Press" January 28, as members of the national and regional news media braved the cold, wind and snow of southern Utah to communicate the dogs’ stories to their affiliates, readers and viewers across the country.

Find out more about Dogtown at Best Friends Animal Sanctuary

And that same day, the National Geographic Channel (NGC) announced that "DogTown," its well-received TV series based on Best Friends’ work with abused, neglected and abandoned dogs, will return with new episodes beginning this summer.

A film crew will spend the next few months "documenting the rehabilitation of 22 dogs that belonged to Michael Vick and are now residing at Dogtown," according to NGC. "The series will focus on four of the toughest cases as the experts at Dogtown try to socialize these pit bulls."

The announcement of additional episodes comes as welcome news to Best Friends members and so many other viewers who’ve been clamoring for more Dogtown. The weekly series completed a three-episode arc on January 18.

The new episodes are part of the overall philosophy of the series, which is to "take viewers on a journey inside the bustling grounds to meet the dogs and the skilled professional team dedicated to ensuring that even the toughest cases survive. This expert team of caregivers has a single mission – to transform hopeless dogs into loving pets."

In addition to meeting – and falling in love with – the dogs who’ve persevered through the worst that life can throw at them, viewers get to know members of Best Friends’ dedicated Dogtown staff and witness the miracles they perform every day.

From the beginning, National Geographic said that if the series proved successful, additional episodes would be produced and broadcast. Now that it has come to pass, Best Friends would like to thank its members, supporters and viewers whose overwhelmingly positive feedback helped ensure that more people will have the chance to learn about what we do and hopefully join our effort to achieve the goal of No More Homeless Pets.

Keep an eye on our website and we’ll let you know as soon as we find out the dates, times and episode summaries. And, as always, encourage your friends and family to make time to watch this incredible show.