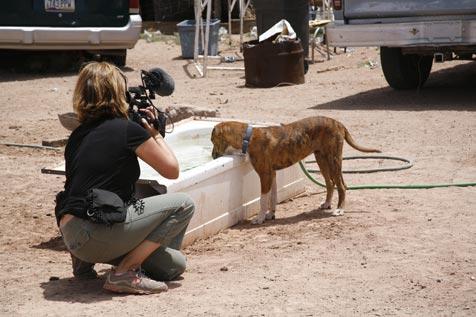 Best Friends members and staff are getting ready for the coolest premiere on television – the National Geographic Channel’s new TV series, "DogTown," which features the work we do for abused, neglected and abandoned dogs who come to our sanctuary in southern Utah.

Word is that members around the country are planning Dogtown parties at their homes for the debut episode – which airs January 4 at 9 p.m. Eastern Time – while Best Friends employees are looking forward to a special showing of the first two episodes on the big screen at the Crescent Moon Theatre in nearby Kanab, Utah.

Meanwhile, we have launched a Dogtown at Best Friends web page, which has a number of fun features, including videos of your favorite Dogtown dogs and introductions to some of the staff members highlighted in the TV series. You can also download wallpaper for your desktop and send e-cards to your friends.

The web page also features comments from series producer Darcy Denett, who said she has "traveled extensively and worked on many exciting projects, but I’ve never enjoyed working on a project quite as much as I've enjoyed working on ‘DogTown.’

"My first impression of Dogtown was ‘Wow!’ The dogs really do own this place. It's so incredible to realize that there's a dedicated place in this world where every animal's life is valued, regardless of medical issues, behavioral issues, age, size and beauty."

Click here to go to Dogtown at Best Friends.

After the first episode of "DogTown" airs January 4 (it will be replayed at midnight, then again on January 6 at 9 a.m.), subsequent first-run episodes will appear in the same time slot – Fridays at 9 p.m. Eastern Time. Check your cable or satellite guide to find the National Geographic Channel.

Premise of the show

According to National Geographic, the show "takes viewers on a journey inside the bustling grounds to meet the dogs and the skilled professional team dedicated to ensuring that even the toughest cases survive. This expert team of caregivers has a single mission – to transform hopeless dogs into loving pets."

In addition to meeting – and falling in love with – the dogs who’ve persevered through the worst that life can throw at them, viewers will get to know members of Best Friends’ dedicated Dogtown staff and witness the miracles they perform every day.

Episodes feature multiple story lines, with individual staff members helping each dog to face his or her own unique challenges.

National Geographic has produced three episodes, which will run each of the next three Fridays. If the series proves successful, additional episodes will be produced and broadcast.

So encourage your friends, family members and co-workers to watch the show. If you know people who don’t get the National Geographic Channel, invite them over for a Dogtown party. If you don’t get the channel, invite yourself to the home of someone who does.