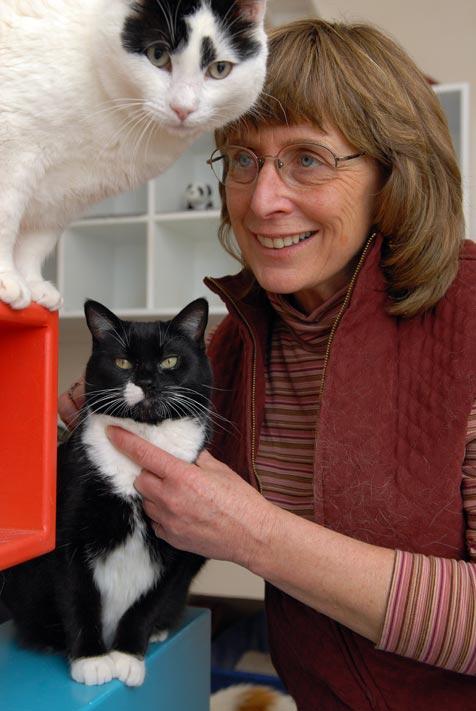 Back in the mid-1980s, not long after the founders of Best Friends had set up shop in the desert of southern Utah, Dr. Kathy Quigley was a few years out of veterinary school and working at an animal clinic in St. George, the closest "big" city to the sanctuary. The founders didn’t yet have the financial means to hire an on-site veterinarian, so they had to make the call to St. George whenever any of the dogs or cats needed medical attention.

The owner and primary vet of the clinic had become sidelined with leukemia shortly after he hired Dr. Kathy, so she made the regular 90-mile trip to this remote spot in the desert where a number of ambitious (some thought crazy) people were in the formative phase of building a no-kill animal sanctuary.

"I remember thinking [their mission] was a rather tall order," she said during a recent visit to the sanctuary, her first in more than 20 years. "But I’m amazed at what they’ve done."

Study on improving testing of cats with feline leukemia

At the time of Dr. Kathy’s initial visits, Best Friends was caring for a large number of cats with feline leukemia. Founder Francis Battista says she earned a place in our "hall of fame" when she helped Best Friends participate in a groundbreaking study that would make testing cats for leukemia simpler, easier and much more reliable than it had been in the past. That testing method, which uses saliva samples to detect the virus, was later incorporated into the regular physical exam Best Friends gives its cats.

"Dr. Kathy helped put Best Friends on the cutting edge of veterinary medicine," Battista says, "and gave our animals the benefit of products and breakthroughs that we wouldn’t have been able to afford otherwise at that early stage of our existence."

In the 20 years since, Quigley has continued to have a fascinating career, one that has taken her numerous times to the Russian Far East to help save the rare Amur tigers. Her career has, in one regard, come full circle since her days at the sanctuary. She now offers low-cost spay/neuter surgery and other basic medical care at her own community clinic in Bozeman, Montana – involving herself in a mission similar to the one Best Friends had set out to complete when she was making her rounds at the sanctuary.

Before coming to Utah, Dr. Kathy interned at Seattle’s Woodland Park Zoo, caring for its wild animals. After leaving Utah, she rolled that experience into a position with the Hornocker Wildlife Institute at the University of Idaho. There, she met her future husband, Howard Quigley, a graduate student at the time, and together they began making frequent trips to Russia to conduct conservation field work on the Amur tiger, the black bear, the Asiatic brown bear and other species.

She tells the story of one trip in which she spent two harrowing weeks trying to arrange the transport of three Amur tiger cubs from the city of Khabarovsk, located in the Russian Far East, to the U.S. The cubs had lost their mother, and local conservationists feared they wouldn’t survive long in the Russian wild, where deforestation and poaching were, and still are, endangering local wildlife. Dr. Kathy had found places for the cubs at zoos in the U.S., but before she could have them flown to the U.S., she had to have, in hand, export and import permits from officials in both Moscow and Washington, D.C.

Navigating the bureaucratic maze of either government, especially the Kafka-esque nightmare that is Russia’s, requires extraordinary patience and persistence. But having to navigate both at the same time, let alone from someplace as far removed from both capitals as the Russian Far East (Khabarovsk is eight time zones ahead of Moscow), is truly a superhuman feat. But Dr. Kathy somehow managed to pull it off – while caring for the tigers in a small, dingy apartment in a socialist housing block.

"The tigers were pretty mean, and didn’t like me at all," she says. "It was two of the most trying weeks of my life."

Back in the U.S., Dr. Kathy maintained her conservation work, going out on field studies of grizzly bears, cougars and wolverines in Yellowstone and Grand Teton national parks. With the birth of her daughter Allyson in 1994, Dr. Kathy got out of wildlife field work and back into a position that would keep her closer to home. She went to work as a vet at a Bozeman animal shelter, and wrote a children’s book entitled "Tika the Tiger."

However, she found the work at the shelter to be restricting. "I felt I could reach more people and do more good in the community with a clinic of my own," she says. So, a year ago she opened Snip Veterinary Clinic, where she now performs low-cost spay/neuter and offers other basic medical care.

She’s also a participating vet in the Montana Spay/Neuter Task Force, a mobile sterilization service that reaches communities throughout the state. She usually takes her daughter along. At age 13, Allyson appears to be following in her mother’s footsteps. "Allyson is a wonderful vet tech," Dr. Kathy says with pride.

She and Allyson recently returned from Africa, where they both helped capture and relocate rhinoceros, wild dogs, and even a cheetah. "My new goal in life is to give Allyson a view of the world, showing that Bozeman is not the center of it," she says.

"In real life, I spay and neuter dogs," she adds, "but in my ideal life I’m traveling with my daughter."

Please consider a gift to help animals in need.