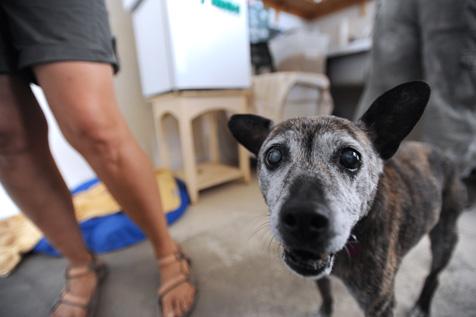 Dream job for an older dog

Most dogs love having other dog buddies to play with during the day. After all, there are so many things we humans don’t understand as well as another dog. You know, the thrill of chasing each other around the yard or the joys of barking at that squirrel in the tree. 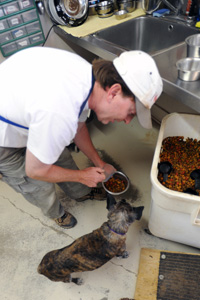 And yet, for a senior dog named Piper, he’d reached a point in life where what he needed most was a little peace and quiet. When Piper first came to Best Friends three months ago, he moved into a regular play area. It was obvious early on that he wasn’t fitting in well.

Piper had some problems with his vision. He also struggled getting around on his slightly wobbly legs. As a result, it was all too easy for him to get bumped around with all the hustle and bustle of a full play area.

In rather short order, Piper landed himself the role of kitchen dog. It’s a pretty coveted spot, mind you. ("Hmm, that food looks kinda iffy. I’d better taste it just in case.") Plus, he’s the only dog in the kitchen. With the extra privacy, Piper has found his niche.

His eye problems have improved during the months he’s been at Best Friends. Good thing, too. His eyes needed attention right away. "He had increased pressure (borderline glaucoma) in his left eye and chronic inflammation (uveitis) in his right eye," explains Best Friends veterinarian Dr. Brooke Groskopf.

For treatment, Piper initially needed eye drops four times a day. As luck would have it, his job as kitchen dog made that process easier. Caregivers can give him the eye drops right in the food prep area. "He’s really good about it," says caregiver Tom Williams.

After a month or two, Piper’s eyes improved to where he now only needs eye drops once a day. He still has limited vision yet sees enough to get around just fine. Even better, he shouldn’t require any truly special care for his eyes. "He will probably need some kind of eye drop for the rest of his life, but that's it," says Dr. Brooke.

As for the wobble in his legs, that will likely always be there even though it doesn’t keep him from walking. (Hey, he’s in his golden years anyway. He has no desire to run laps around the Sanctuary.) Exercise is still important, though, so Piper goes on a walk every day for good health.

These days Piper is one happy camper. His eyes feel better, he enjoys the companionship of people who love and pamper him, he has tasty food, and he gets to take all the power naps his little heart desires.

The animals need your help