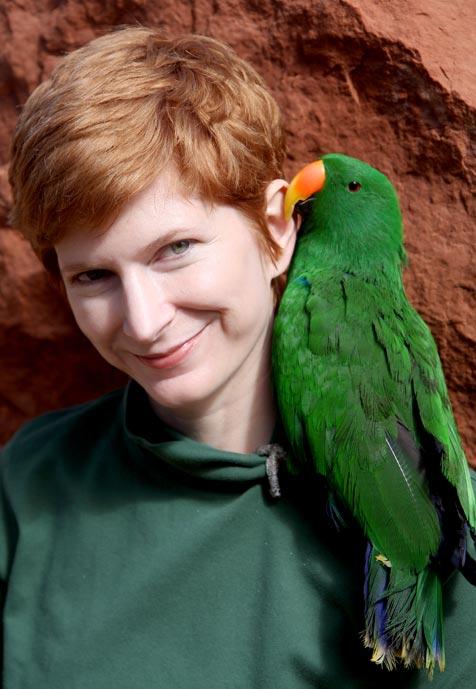 Emergency room doctor Suzanne Corrington didn’t know at first whether she could bring a bird into her life. She’d had dogs and cats, but never birds. It took a lot of thinking, a lot of work, and a lot of frequent flier miles, but Charlie the parrot finally won her over in the end. Go, Charlie!

Suzanne came to Best Friends at Thanksgiving 2007 with her mother and brother. During the visit, Suzanne made a connection with an eclectus parrot named Charlie. Charlie came to Best Friends two years ago when his bird rescue group lost their property. There was something about him that captured Suzanne’s attention.

Still, she didn’t want to make a hasty decision to adopt. The whole family flew back home, but Suzanne couldn’t stop thinking about Charlie. Could she love a bird? She decided to return for a closer look. She flew back in January to spend a couple days volunteering at the Parrot Garden, the bird part of the sanctuary. As before, Charlie wiggled his way into her heart, but Suzanne didn’t want to adopt until she was absolutely sure.

After the January visit, Suzanne went home to Tennessee to really think things over for a couple months. At last, she decided her life wouldn’t be the same without Charlie. So she set up a cage for him in her house and flew back to pick him up. They traveled home first class so that Charlie wouldn’t feel cramped in his carrier (lucky bird!).

Suzanne fully intends to love and spoil this emerald-green beauty. As one example, she plans to build an aviary attached directly to her house. Since Suzanne lives on a mountain, Charlie will have quite the view indeed. Wow! Wonder if Charlie will let any of us come visit him now and again?

Read about the Parrot Garden at Best Friends Animal Sanctuary.