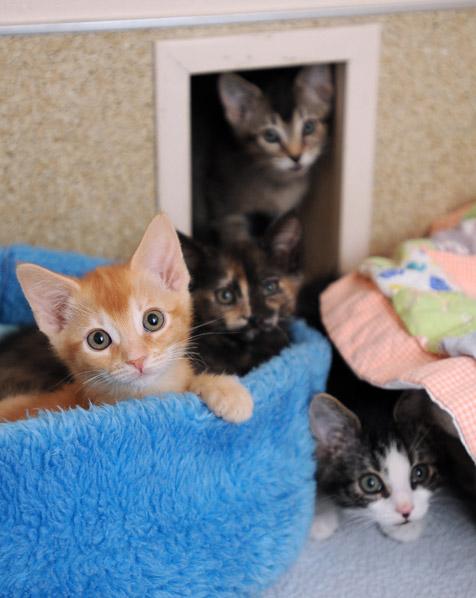 Eight kittens bounce back with style

Eight adorable young kittens at Best Friends have been melting hearts and making friends ever since arriving at the Sanctuary. They deserve all the attention, too. They didn’t have the easiest start in life.

Leaving a hoarding situation behind

Milkshake, Turtle, Dizzy, Socrates, Pippa, Silverfish, Pixel and Bunny — who are from at least two different litters — came to Best Friends from a hoarding situation in Los Angeles, California. They arrived with eye and upper respiratory problems and were a bit on the thin side, all of which began to improve soon after they arrived — especially their weight. "After they got here, they just started piling on weight," says kitten caregiver Jean Morris.

In fact, it was a challenge to estimate their true ages at first because they started growing so quickly. Give skinny kittens enough nutritious food and they can rebound in a hurry.

Their eye and upper respiratory problems have all but disappeared in the few short weeks they’ve been at the Sanctuary. Thanks to medicated eye drops, solid nutrition, and constant TLC, the kittens have improved leaps and bounds from top to bottom. "They’ve really turned around health-wise," says Jean. "You’d never know they came from a hoarding situation." 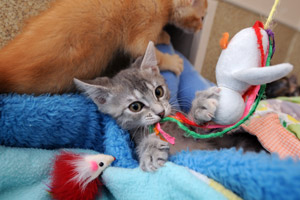 Another potential challenge with animals from hoarding situations can be shyness resulting from a lack of socialization with people. Here, the kittens continue to amaze. They actually love humans. "They’re darling," Jean says. "They’re very people-friendly."

In part, this could be because they were young enough to still be impressionable. They’ve had nothing but love from caregivers since arriving. Even so, they responded enthusiastically to their caregivers almost immediately. That’s an impressive accomplishment considering their background.

Here’s one small example. Not long after the kittens arrived, Jean went into one of the rooms that, at the time, held four of the kittens. However, Jean could only find three kittens that day. She looked under every hidey hole, and checked every corner. (It’s not like they had many places they could go.) The missing kitten was Milkshake — so named because he loved standing in the food dish when they provided goat’s milk for extra nutrition.

Jean found him eventually, in a place she would never have thought to look. He’d attached himself to the back of her robe right after she entered the room. Little Milkshake was so eager to say hello that he decided to take matters into his own claws.

Happy endings ahead for litter of kittens

With a face like that, Milkshake doesn’t have to try nearly so hard to catch anybody’s attention. That goes for the whole group. "They’re just so sweet and active," Jean says.

While they’re still too young to meet visitors and volunteers, have no fear. Once they get a chance to mingle with the public, these eight newcomers will start winning hearts all over again. And once that happens, forever homes are often swift to follow.

Adopt a kitten or cat

If these eight kittens don’t manage to capture your heart, keep looking. There are hundreds of cats available for adoption at Best Friends.