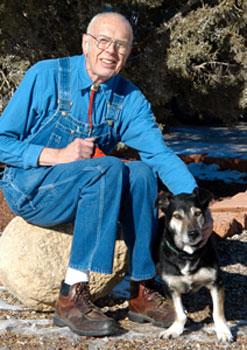 Family's commitment to care for man's adopted dog after his death

The ties that bind the Toelken family together include Posey the dog’s leash. Family members promised Posey’s person Richard Toelken that his dog would be cared for after his death.

In January 2005, 81-year-old Richard was diagnosed with a cancer that ravaged his body. His family was saddened, but there was never any question about what would happen to the dog Richard adopted from Best Friends Animal Sanctuary.

"We don’t believe in throwaway animals," said Richard’s son, Paul Toelken. "We view Posey as a contributing member of the family. She was able to speak to Dad in a way that humans don’t. She pleased Dad. She was never far from his side."

The family feels so strongly about Posey that Paul’s sister Lucinda Marsh, who lives in nearby Chino Valley, is the backup in case Paul should ever be unable to care for the dog. That’s quite a lot of love for this little mixed-breed dog who just decided one day that she was going home with Richard.

Connie Perry, Best Friends' dog adoption coordinator, always gets a twinkle in her eye when she tells the story of how Posey said to Richard, "Pick me."

The first time Connie met Richard was in 2003 when he came to bury his previous dog at Best Friends’ pet cemetery, Angels Rest. "At that time," she said, "he wasn't ready yet to replace Molly, but he said that when he was, he would come back. Several months passed and then he and Paul did return. He had been watching our website and saw a little corgi mix dog and came to adopt her in January 2004."

But then they met Posey, whom Connie described as a "middle-aged basset mix who wasn't the nicest to other dogs." Posey proceeded to launch a major stare-down until Richard buckled. Finally Richard said, "I can't leave her; she's got her mind set on me."

Richard gave Connie regular updates on Posey’s antics and adventures. She was at his side everywhere, even at church. "Mind you," Paul said with a chuckle, "Posey would be in the sanctuary at Open Door Baptist Church during a regular service. Guess our church means the open-door thing."

Connie always looked forward to Richard’s calls. And then one day, she said, "He called to let me know that he had been diagnosed with terminal cancer. He said he knew his time was short, but that he was grateful to have lived such a full life. He said to not worry about Posey because his family would take care of her."

Richard passed away at home on May 8 in the midst of his family, with his dog close by.

"It's so refreshing to see a family this committed to a dog," Connie said. "Dogs lose their homes all the time in these same type of situations, and it doesn’t have to be that way. The Toelkens show us all that pets are family members for better or worse."