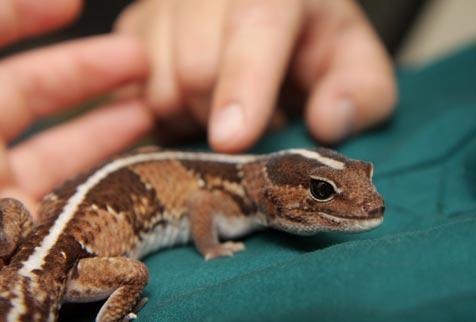 Wild Friends, the wildlife rehabilitation center at Best Friends, now cares for an actual gecko, but one a bit less chatty than the one on television. Wild Friends manager Carmen Smith has named him Bark, since he tends to blend in quite well with that particular element of nature.

Bark came from Phoenix, where he was someone’s pet. When he lost his caregiver and needed a new home, Carmen saw no reason why he couldn’t come to live at Best Friends.

The fat-tailed gecko is indigenous to Africa, and has a fascinating natural defense mechanism built into his biology. When attacked by a predator, the amphibian automatically sheds his tail, leaving that portion of his body to the predator and saving his life in the meantime. What also helps the gecko is the form of his tail—it’s shaped like his head, and that makes it difficult for predators to decide which end to attack.

As for Bark, it’s not that difficult to distinguish the head from the tail, because every time he prepares to eat, his tail shakes. And with his big, bulging eyes, you can’t help but feel instantly charmed by him.