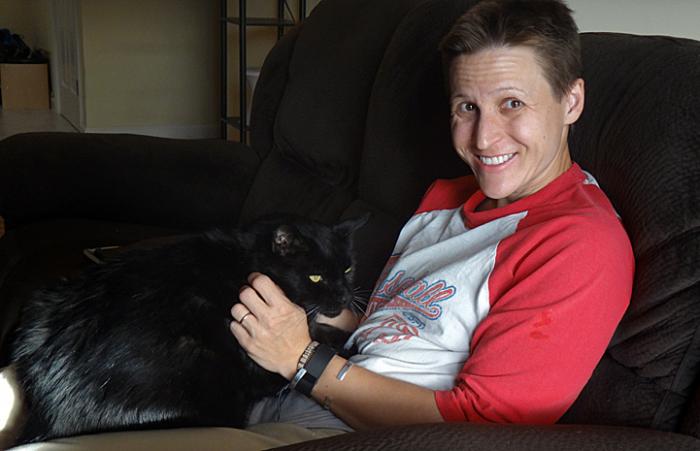 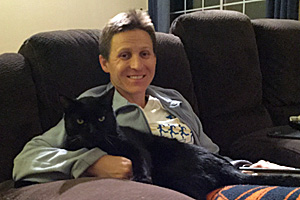 Like a long and winding road, life is full of twists, turns and curves. But Phanty the cat has learned to enjoy the ride and to trust that, despite the bumps and sharp corners, he’ll always land softly on his feet, ready to walk another mile.

The big black cat went from being an elusive stray to a much-loved resident at Best Friends, and now, finally, to a home of his own. And because that home happens to be only a few hours away from where he grew up in Santa Monica, California, Phanty has really come full circle.

Now seven years old, Phanty was once a street cat who went meowing door to door at an apartment complex until he found someone willing to feed him and give him love. Because he was shy and somewhat skittish, he’d drop by, get what he needed to survive and then disappear. Had it not been for a simple test, Phanty might have spent the rest of his life like this.

Phanty’s benefactor wanted to transition him to being an indoor cat, but first Phanty had to go to the vet for a checkup. When a blood test for the feline leukemia virus (FeLV) came out positive, the news seemed quite bad.

FeLV attacks a cat's immune system and it’s also a social disease — which means it is easily spread from one cat to another through close physical contact. Since there was a risk of FeLV transmission, Phanty’s options were limited: He couldn’t stay with his benefactor because she had other cats. He couldn’t go back out on the streets where he could pass the virus to other outdoor cats. And his chances of being adopted from a shelter were poor.

Best Friends, however, has a whole area at Best Friends Animal Sanctuary devoted to cats with feline leukemia, with experienced staff to care for them. Best Friends had space for Phanty at the Sanctuary, so he went there. His life would soon take another turn.

When he was examined by the Best Friends veterinary team, which includes a routine feline leukemia test, he received some good news: His first test had been a false positive. They checked and double-checked, and the results were clear. Phanty didn’t have FeLV after all.

A fresh start for cat

Now that Phanty was secure and healthy at the Sanctuary, he was in the perfect place to make a fresh start. But, surrounded by new faces, he felt shy and unsure of himself. He ran up to the rafters and peered down with his wide green eyes watching everything, but not daring to venture down and be a part of it.

Gradually he began to relax, climb down and, eventually, to explore. Once his feet were firmly back on the ground, Phanty began paying special attention to volunteers and visitors whenever they’d come into his room. He’d saunter over to say hello with his back arched and tail up, anticipating some nice scratches. Then he’d roll over at their feet and show his big belly. 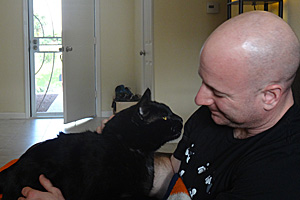 Adopted into a home for the holidays

That’s how Phanty wooed the Soskins when they recently volunteered at the Sanctuary. The couple wanted to add a cat to their household, but they were feeling overwhelmed by the large number of cats to choose from in Cat World. Phanty decided to make things easy for them. He walked right up and introduced himself. “He seemed mellow, like he’d get along well with our three other cats,” Matthew Soskin says. “He’s also a fun dude with a cool story.”

As it turns out, Matthew and Phanty grew up in practically the same neighborhood, and Phanty reminds him of a neighborhood cat he loved as a child. “That cat was like a brother to me,” Matthew says. Now, Phanty will be like a son. It’s yet another turn in the road for a cat who’s been around the block a few times. But this time, the final destination is home — just in time for the holidays.

Photos courtesy of the Soskins