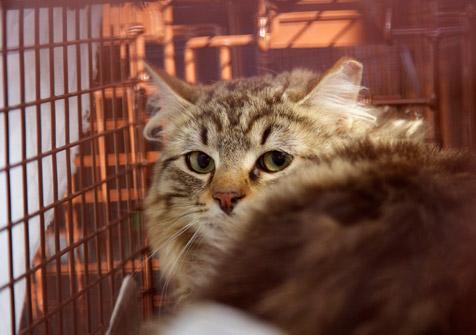 The Feral Freedom program from the Best Friends cat initiatives uses trap/neuter/return (TNR) to keep feral cats (aka community cats) out of the shelter system. Launched in 2008 in Jacksonville, Florida, where First Coast No More Homeless Pets partnered with Jacksonville Animal Care and Protective Services (JACPS), the program relies on the partnership between a local TNR organization and the municipal shelter. From 2006 to 2007, JACPS took in 3,054 community cats, of which 2,955 were killed. From 2010 to 2011, the intake number was 4,325, of which 786 were killed.

To Best Friends, taking Feral Freedom to DeKalb County, Georgia, made a lot of sense. Rebecca Guinn, animal advocate and LifeLine Animal Project founder, has been working to increase the save rate for shelter animals in the area for over a decade. The partnering of LifeLine with DeKalb County Animal Services and Enforcement in August 2011 was the start of a program that has produced results that have exceeded everyone’s expectations.

Sergeant TC Medlin of DeKalb County Animal Services and Enforcement shares the most striking changes he’s seen in the last eight months: "The biggest thing we’ve noticed is the number of cats in our shelter — there aren’t any. It’s gone down to almost zero. I’m speaking from the shelter side of the Feral Freedom program, and we’re amazed at how quickly we’ve seen a turnaround. Last year, we were inundated with cats and kittens, and now we might have one or two in our cat area. It just doesn’t get any better than that."

Rebecca is also extremely pleased with the partnerships that make the Feral Freedom program work. Of DeKalb County Animal Services and Enforcement, Rebecca says, "It wouldn’t work without them." She explains DeKalb County is a melting pot of people from different cultures and socioeconomic backgrounds. The county includes both rural and urban environments.

Rebecca says, "What’s really great about this program is the focus. We’re using all the solutions for one concerted effort and it is working — TNR, animal control, working with other shelters, and educating the public are paying off in a huge way. The save rate is tremendous; the county is down to around 20 percent euthanasia rate for cats, and at the start of the program, it was at 78 percent."

LifeLine is taking in cats straight from the field, with the help of animal services. The animals are spayed and neutered and then either returned or put up for adoption, depending on the cat. One surprise from the program is just how many free-roaming cats are friendly — many more than previously estimated.

LifeLine also has additional resources available to the public via their Catlanta program, a feral cat food bank and a trap loan program that are free for local community cat caregivers to help them do more for their free-roaming charges.

Janet Samuel is the Best Friends community cat coordinator for DeKalb County, and she, too, sings the praises of DeKalb County Animal Services and Enforcement and LifeLine for creating a lifesaving machine. She says one of the best aspects of Feral Freedom is that it is helping the people who are helping the cats. In addition to picking up the cats from LifeLine and returning them, she also helps field the cat nuisance complaints. And those are dwindling.

Looking for ways to help?

Adopt from, volunteer with, and foster for Lifeline Animal Project to help DeKalb County achieve a time of No More Homeless Pets.