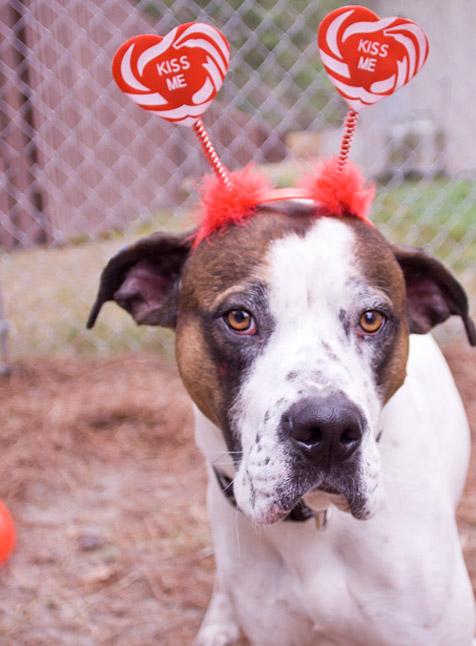 Reggie, an American bulldog, was waiting for someone to pick him at Jacksonville Animal Care and Protective Services (JACPS) in Jacksonville, Florida. He was not a bad dog, but being housed in a kennel environment was wearing on him. His behavior was deteriorating before the staff’s eyes. He was becoming barrier reactive, which manifested as frustration that made him appear aggressive.

Reggie’s future could have been precarious, like so many other animals who wind up in the shelter system. But thanks to Jacksonville’s First Coast No More Homeless Pets Adoption Center (FCNMHP) — sponsored by Best Friends Animal Society — Reggie got the individual care he required. He was quickly pulled from the main population and housed in a special run while staff from FCNMHP worked on his training and behavior. He was then transferred to the adoption center to wait for his perfect adoption match.

"The First Coast No More Homeless Pets Adoption Center is taking a lot of the animals that would have been killed," says Nikki Harris, FCNMHP adoption program director. "It is the endpoint for animals who would otherwise not be saved. One of our employees walks through the municipal shelter every day with their staff and (they) decide together which animals need to be transferred. We all work together to facilitate adoptions to save more lives."

Scott Trebatoski, division chief of JACPS, calls the new adoption center "a critical piece to the puzzle" in raising the save rate for the area. He mentions the center is in a part of town that doesn’t have any other adoption facilities. So it provides the public with a great alternative to buying a pet from a breeder or pet store.

FCNMHP is taking a cooperative approach to saving lives. For instance, kittens in the Feral Freedom program, a trap/neuter/return partnership between JACPS and FCNMHP, are taken to the Jacksonville Humane Society, where they are adopted out quickly. This prevents the FCNMHP Adoption Center from becoming overcrowded.

Martine Williams saw Reggie’s adoption profile online and thought he would be the ideal dog for him. Martine has had American bulldogs in his family for many years. What makes Reggie different is he is the first dog Martine has ever adopted.

"I couldn’t be happier with the (adoption) experience," shares Martine, "I hadn’t been to an adoption center before and was surprised by how nice and well maintained the facility was. The staff was so helpful, especially Nikki, who told me what Reggie’s issues were and let me know that they would be there for me if he needed any further training."

Reggie now lives on over 20 acres of land and is loving every minute of it. As for his barrier aggression? Martine says Reggie has not displayed any behavioral issues at all. That’s just one more thing that’s part of his distant past.