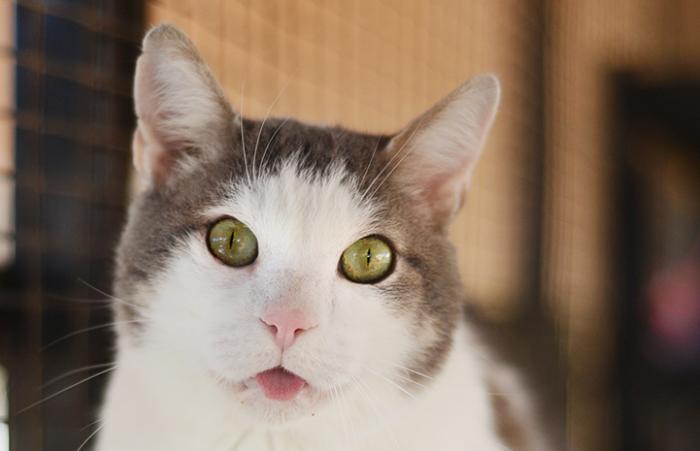 Grayson the cat knows all about keeping the faith when things get tough. He may only be three years old, but he’s already got a lifetime’s worth of wisdom and experience in overcoming adversity. Someone once took advantage of his sweet and trusting nature and did something horrible to him. Grayson was badly burned – and barely clinging to life.

Luckily, he was rescued and taken to a shelter in Georgia, but he’d suffered serious burns on his back, and needed months of intensive care. Throughout the entire process, he was a trooper and stayed strong. And his wounds healed remarkably well. Still, the brave, resilient cat was having a hard time finding a home. He’d lost some of his beautiful gray and white fur, he had scars and bald patches, and he also had the feline immunodeficiency virus (FIV), which weakens a cat’s immune system. Best Friends caters to special-needs cats like Grayson, so he came to the Sanctuary. 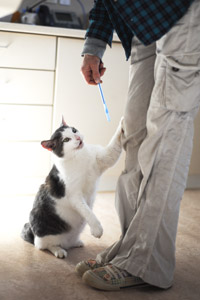 Because of his special needs, in some places, Grayson may have had trouble fitting in, but not at Best Friends. He’s made himself right at home in Cat World. And he’s already earned a reputation as a very sweet and loving boy. Whenever anyone walks into his room, he stops what he’s doing – even if he’s in the middle of grooming himself, with one leg stuck straight up in the air – and walks up to greet them, purring all the way.

That’s usually all it takes for people to fall in love with Grayson. Because of his scars, and all he’s been through, he seems like a big, tough guy. Yet he’ll rub affectionately against his caregivers’ legs, and arch his back for head or rear-end scratches.

He even takes things in stride if other cats get a bit out of line with him. Recently, one of his roommates charged Grayson, knocking over a food dish and scaring him. But Grayson just shook it off and walked over to his own food dish for a snack. He was far less concerned about the incident than his caregivers, who decided to move him into a room with cats who share his easygoing, carefree attitude, just to make sure he stays safe.

As laid-back as Grayson is, when his caregivers sweep and wash the floor, he springs into action, darting out from behind a cat tree or support beam, and pouncing on the broom and mop. And, ever since he had a few teeth extracted, he makes everyone smile with the endearing way his tongue hangs out of his mouth.

But behind Grayson’s silly face and playful antics is an incredible spirit of survival and triumph. Despite the fact that someone hurt him badly, he’s kept an open heart and has chosen to make forgiveness, love and grace a way of life.

Find out more about Grayson and all the cats at the Sanctuary.