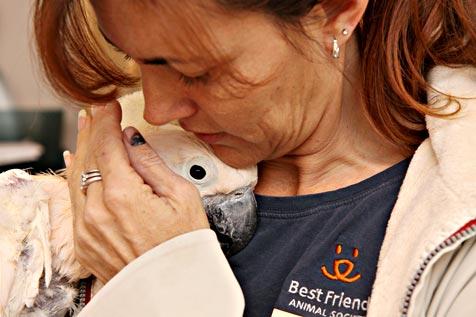 Former breeding bird has anxiety being outside his cage

There aren’t too many prison-break movies in which the gang’s goal is to break into a jail. Usually it’s the other way around, because most folks don’t like being caged up. But Josh the Moluccan cockatoo thinks inside the box, so to speak. He has such a strong instinct to run to safety that whenever he’s outside his cage, he panics and wants more than anything to break free and dart back inside.

There’s a reason for his behavior, though. Before coming to Best Friends, Josh was a breeding bird for a long time. As a breeder, he had little experience with or attention from people. He had hardly left his cage in 17 years.

Spend some time with Josh now and you’ll find he responds well to affection, craves it even, yet he seems so uncertain. He wants to be loved, but he’s almost afraid to hope for it. Life at Best Friends is so much different from how things used to be for him.

The easiest way to hang out with Josh is to reach inside his cage and give him a good long head scratch. Unlike some birds, he doesn’t have any cage aggression. To him, a person inside his cage represents the best of both worlds. He’s allowed to stay in his safety zone while receiving human attention. Josh will soak up that combo forever.

Of course, it’s not the best solution for him in the long run. He has to learn there’s a whole wide world out there waiting to be enjoyed. So his caregivers coax him out of the cage several times a day for some one-on-one time. Progress is slow, but they're patient.

Josh also goes on overnight sleepovers with parrot staffer Wendy Hatchel. He really likes the extra attention, but he still hasn’t connected the dots that time spent outside those bars can be fun. Even with other cockatoos as role models, Josh doesn’t understand why anybody would want to leave a cage unless there’s a fire in the room. In time, though, he’ll get there. The fact that he wants to connect with people helps a ton.

Not all new things are as scary to Josh as outside time, however. Recently, he’s discovered sunlight! When he’s at Wendy’s home, he clings to the window-side of his cage the entire time the sun is shining. For Josh, so many everyday matters are as foreign to him as the other side of the moon. Good to know not all of them are scary.

You can learn more about the sanctuary and its parrots by taking the online tour of Best Friends’ Parrot Garden.