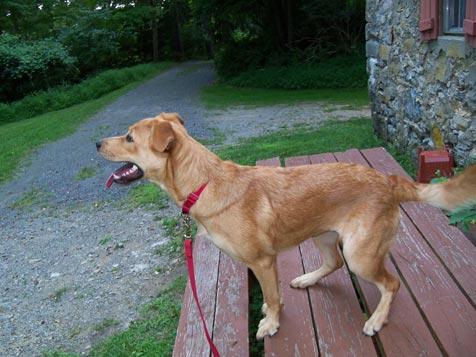 Dogs are born fully understanding a particular piece of wisdom that eludes far too many humans: namely, play time is serious business! When Dr. Karen Dashfield, DVM, entered a New Jersey animal rescue with tennis ball in hand, she wasn’t merely looking for a dog to have fun with. She was looking for a dog who would ultimately save lives. As she strolled through the building bouncing her tennis ball, one dog in particular caught her attention. Delilah, or Deli for short, was so focused on the tennis ball that the rest of the world didn’t matter. Dr. Karen thought she might have found a winner and asked the kind people of Noah’s Ark Animal Rescue if she could take Deli in the play area for a little while.

Outside, the fenced-in play area was right next to a New Jersey freeway. The day was hot and muggy. There were all sorts of distractions and reasons for a dog not to want to play games. But for Deli, nothing else mattered. Once she stepped into play mode, UFO invasions couldn’t have caught her attention. Dr. Karen had found her girl.

Best Friends has had resounding success with our Search and Service program. Every dog to graduate the program as a search dog has found a home with a handler on a search and rescue team. Each search dog is first and foremost a pet in the handler’s home, so they really get the best of both worlds. Such an arrangement is the perfect fit for dogs like Deli. With a proper way to channel their natural energy and intellect, these dogs thrive in the program and ultimately in their homes afterward.

Deli has been no exception. She’s officially a Best Friends dog, but will continue training with Dr. Karen in New Jersey until she is placed permanently with a handler in a home all her own. Dr. Karen, a search and rescue handler, veterinarian and instructor for approximately 15 years, helped launch the program at Best Friends and has continued assisting ever since.

As the program picks up speed and demand increases for some of these terrific former shelter dogs turned search and rescue superstars (or service dog superstars!), Best Friends decided to have Dr. Karen pull dogs from shelters at her end of the country. The thing is, these dogs are everywhere. It’s just a matter of knowing how to recognize them.

Training rewards for one dog

In her training, Deli has been having the time of her life, which is crucial to her success. Training time, or "work time," should be the favorite part of the day. For Deli, the rewards of tug-of-war and hugs and kisses when she finishes a task make work sessions feel like her birthday every day of the year. "She has an eight-foot tongue and likes to apply it to all parts of your body!" jokes Dr. Karen.

Deli recently got to experience another highlight during her training. Dr. Karen brought Deli to Critter Camp, a day camp for kids who love animals. Deli was part of a demonstration for search and rescue work and played tug of war for 45 minutes, thereafter receiving love and pets from 50 kids. As far as Deli was concerned, that was the equivalent of back-to-back birthday parties with double cake and chew toys on the side.

In truth, Deli is earning A’s in her training across the board. "She’s coming along beautifully," says Dr. Karen. No doubt Deli will end up a phenomenal search and rescue dog in a loving home one day soon. And all because she knows full well the wisdom of following the bouncing ball.