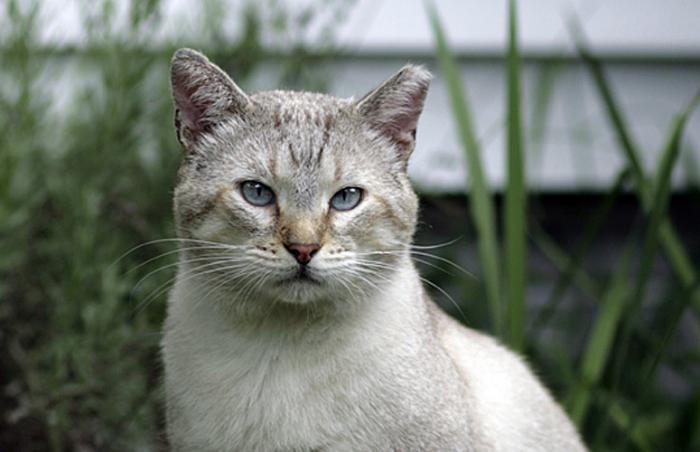 Bob Gast, a three-legged Siamese mix of great distinction living in Indianapolis, Indiana, shows off his tipped ear (which indicates that he has been neutered) proudly. While he is not "owned" in the traditional sense, he is very cared for and very loved. You see, he is a community cat (aka feral cat). Earlier in his life, he had been abandoned on the streets of Indianapolis or was born to a feline living on the streets. Somewhere in his lineage there was a failed relationship with humans. But that was then and this is now. 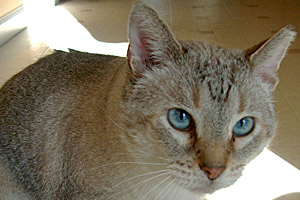 IndyFeral - an integral part of Foundation Against Companion-Animal Euthanasia (aka FACE Low-Cost Spay/Neuter Clinic) - introduced the Feral Freedom program with Indianapolis Animal Care & Control. Free-roaming cats are not euthanized, but instead returned to their colonies in a highly effective trap/neuter/return (TNR) endeavor.

Bob was one of the first cats to be saved by Feral Freedom. His caregiver-turned-guardian, Steph Gast, shares how Bob became part of her family: "He needed to find a new place since he lost his caretaker, so my garage seemed to be a good relocation halfway house. It turned out to be love at first sight for both of us. He began following me as I worked in the yard, became friendly to me, and finally almost tore the door off to come indoors."

Steph knows Bob's a valued member of their community, and so do his local elected officials.

January 7, 2013, marked a milestone for Foundation Against Companion-Animal Euthanasia when they were presented with a City-County Council Special Resolution of the City of Indianapolis and of Marion County that was signed by the mayor. The document illustrates results: In 2000, the city shelter system animal euthanasia rate peaked with 22,000 animals killed; by the end of 2012, FACE had helped drastically reduce that number to 6,000 - a reduction of more than 65 percent.

City-county council member Zach Adamson relays this about FACE: "I think what best sums up what's so great about their work is two-fold. Animal lovers in Marion County are also taxpayers. The work that FACE is doing both in the clinic and in public education has made a huge impact on the number of pets being euthanized. This number is dropping because the number of animals being taken to Animal Care and Control is dropping. This reduction has not only saved the lives of thousands of cats and dogs, but has saved countless tax dollars for the people of Marion County. The city of Indianapolis is fortunate to have an ally in FACE." 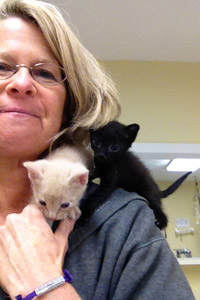 Behind every great success story in animal welfare is a person who saw the serious issues and wasn't daunted by the road ahead. The person in this story is dedicated TNR expert and No More Homeless Pets Conference speaker Lisa Tudor. Lisa is the director of development and outreach for FACE, and she is also the founder and executive director of IndyFeral.

She is thrilled with the special resolution and has seen her community come around. Along the way, she's seen a TNR ordinance passed in 2006 and then the launch of the Feral Freedom program in 2010.

She explains, "Over a decade ago, I jotted down all the resources for ferals in the city, and there was zero." She identified an unfulfilled need, and with her marketing background, set about to change the situation.

"There are so many stakeholders in TNR; to make sustainable change, you've got to bring them all together, and that's what we did. From city officials, to our local veterinarians, to our local humane societies and independent rescues, and of course the public, they all had to be brought to the table.

"We're very fortunate to have council members, such as Zach who not only understands the long-term benefits of TNR but also recognizes the value these animals have."

To compound the results of their work, FACE has also become a Best Friends' No More Homeless Pets Network partner. "We were so excited to be accepted into the No More Homeless Pets Network," Lisa says. "Best Friends has always been an inspiration. Our mission and vision really align. When we were interested in the nuances of public policy, we were able to reach out to Laura Nirenberg (Best Friends' legislative attorney for the cat initiatives). I don't know what we'd do without Best Friends."

Lisa is looking toward the future when the paradigm shift is complete: "I want people to see one of our 27,488 ear-tipped cats and recognize immediately what that means, and know if they see a free-roaming cat without an ear-tip, what they can do."