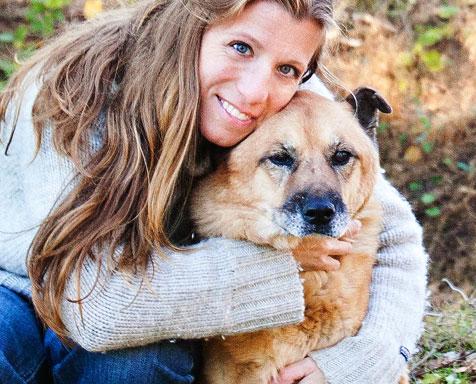 Christie Arlotta has spent most of the last decade pondering ways her future choices could better help animals in need. She’s an animal lover who has wanted to make a greater difference but wasn’t sure how. Christie’s been a member of the Best Friends Animal Society family for about eight years, and while getting active for the animals was on her mind, she wasn’t clear on exactly what that would look like.

How to Start an Animal Sanctuary workshop

Her sister Michelle was also very interested in the whole life-saving endeavor, so when vacation time came there was only one clear choice! They discussed where they wanted to go and decided taking the weeklong How to Start an Animal Sanctuary workshop was an opportunity to come to Best Friends together and learn more about how they could help get their New Jersey community on its way to a time of No More Homeless Pets.

"The future is here!" Christie exclaimed. "We wanted to learn from the people that did it first; that’s a major reason this workshop appealed to us. It’s a whole week, it’s hands-on and just being at the Sanctuary is a huge bonus."

The Arlottas suspected starting something new could be challenging. Their fears subsided when they realized that if they ever had any questions or encountered difficulties, they could easily reach out to Best Friends Animal Society and someone as generous and knowledgeable as Faith Maloney, co-founder of Best Friends and animal care consultant, would answer their questions and continue to give guidance.

Christie had been involved with local rescue groups. Having grown up near Pets Alive in New York, she was privy to the inside workings of a rescue. She had asked a lot of questions over the years, and attending the Best Friends workshop sealed the deal.

A little over a year after attending the workshop, the Arlottas’ rescue organization, Karma Cat + Zen Dog Rescue Society, part of Network Charities from Best Friends, is off to an astonishing beginning, thanks to the dedication of sisters Christie and Michelle.

"We knew right away that we would need a mission statement and a vision statement. Best Friends taught us you needed a real focus, not something ambiguous like ‘I want to save animals.’ "

Right now they are focusing primarily on the Karma Cat side of things. "Cats need the advocacy and help. People need to be educated on the importance of trap/neuter/return, especially in Central New Jersey where catch and kill is still prevalent. Authorities just don’t understand. There are still feeding bans on the books and it’s a huge challenge. There are just so many cats and kittens that need to be fixed and find good homes," shares Christie.

Karma Cat + Zen Dog Rescue Society was incorporated in March 2010, got their nonprofit status authorized in October, and by September had become one of the PetSmart Charities groups. The organization is able to use their local PetSmart store in North Brunswick, New Jersey, as an adoption venue.

This past September Karma Cat + Zen Dog added their own adoption center to help make adoptable cats readily available to the public. It was formerly a storage room used by the Edgebrook Animal Hospital in East Brunswick, New Jersey, which they turned into a happy place for people looking for family members to adopt.

"The animal hospital approached us to see if we were interested, and we said, ‘Let’s go for it!’ We had a fundraiser to raise the money we needed to get started. We decided to use the idea of doing it as a sponsorship so that people that can’t be there physically can feel connected. It really worked!"

The organization now has 20–30 cats in their foster home-based rescue. They are adamant about not getting in over their heads, something that the Best Friends workshop really instilled in them.

"It was hammered home in a good way: don’t take more than you can help. It’s so hard to say ‘no,’ but you are already indebted to the cats in your care. It could take a long time to find them forever homes. You jeopardize everything you’re doing when you start taking in more than you can handle."

In addition to knowing your limits, it’s also important to know your friends. Everyone in the rescue community is a potential partner and certainly an ally. Karma Cat + Zen Dog Rescue Society has a symbiotic relationship with Monmouth County SPCA. Karma Cat often uses Monmouth’s spay/neuter clinic, and, in turn, they take Monmouth cats as often as they can.

Karma Cat + Zen Dog Rescue Society also knows that everything they are able to do for the animals is made possible by their volunteers. "That is something that was important that we learned in the workshop – to not get bogged down in negativity and keep the experience good for our volunteers. They want to be involved with something positive and be part of the happy endings."

The How to Start an Animal Sanctuary workshop helped realize the Arlottas’ dream of helping animals in need. What they took from the workshop exceeds lessons from the classroom. They have also met four other attendees they continue to correspond with, and as their camaraderie continues to grow, so do their successes!

"We’re all in this together to save lives," shares Christie.

Get information on how you can get involved with Karma Cat + Zen Dog Rescue Society.

See a full list of this year’s Best Friends workshops, including Fundraising Essentials for Everyone, Giving Heart Retreat: Workshop to Replenish the Animal Lover’s Soul, Art for the Animals: A Creative Retreat and much, much more.