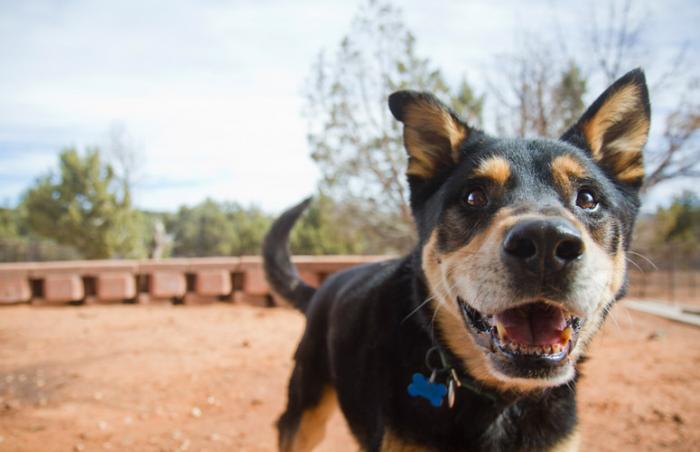 On a Thursday morning in early December, one of Dogtown’s most beloved seniors left Best Friends Animal Sanctuary for his new home. Dozer was a former shelter dog with a loving, easygoing nature, and a special way of talking to people. He lived at the Sanctuary from the time he was 12 until he was nearly 14, and was a big hit with both staff and volunteers. Daphne and Dave Lupfer had seen his sweet face on the Best Friends website, and they wanted to meet him when they came to volunteer in late 2012. But Dozer had just had surgery and was not up to having visitors. It seemed he’d missed out on a wonderful new friendship.

But while the Lupfers went home to eastern Pennsylvania, Dozer recovered from his surgery and got busy being popular. Because he was so good and sweet, he quickly became the sleepover king and an official Dogtown Headquarters greeter. Being a friendly, good-natured dog with a fancy title wasn’t what really set Dozer apart though. He was far more famous for the way he would talk to people.

“Woo-woo-woo!” he would exclaim, dancing around to get someone’s attention. “Woo-woo-woo,” he would say, carrying on the conversation if someone responded. His “woo-woo speak” earned him lots of admiration, encouragement, and new friends. But he still didn’t have a home of his own.

Not until the Lupfers returned, that is. Over a year after he had missed meeting them, they were back – and looking for him. It must have been fate. The Lupfers weren’t planning on adopting a pet. Choosing special dogs to visit when they came to the Sanctuary was just one of the things that got them excited about their trip. And when Dozer walked into headquarters that day, he thought he was just there to be his friendly, welcoming self. Instead, he met his forever family.

“I recognized Dozer right away, and he came right up for a hug,” Daphne explained. “My husband knew almost instantly that I'd be asking if we could bring Dozer home.” Dave was on board. There was just one problem: Dozer couldn’t fly because of his age and a liver condition. It seemed he might miss out on a wonderful family and the perfect home.

Life with his adopted family in Pennsylvania

But the people who loved Dozer were firmly committed to making his dream of a forever home a reality. Dogtown staff quickly contacted volunteers and coordinated a cross-country trip. Four volunteers braved snowstorms, icy roads, and sub-zero temperatures to bring Dozer home. And Dozer did his part by being a five-star co-pilot.

All of Dogtown celebrated Dozer’s adoption. But no one was more excited than Dozer himself; he is now loving life in Pennsylvania. He gets to frolic in the snow in a big backyard with his three new fur brothers. And, when he’s inside, he likes to curl up and sleep wherever Daphne and Dave are. He thumps his tail when he's happy ... and he’s happy a lot. “We are so fortunate that Dozer found us,” Daphne says, “and very thankful we were able to bring him home.”

Learn more about adopting a dog from the Sanctuary.