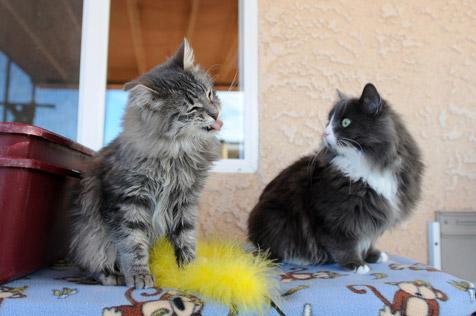 At the Sanctuary, there’s never a shortage of goofy antics from the animals to keep us chuckling. Here are a few from this week.

Anyone who’s ever been inside a classroom knows well the all-powerful influence of the "teacher voice." A teacher puts on a stern face and shifts his or her vocal tone to the most authoritative imaginable. Apparently, it’s a trick that can work on cats, too. 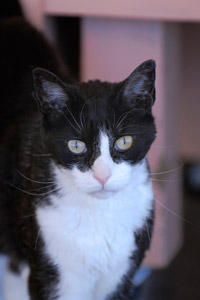 Devin, one of the cats who lives at Cat World Headquarters, stays in the office of Dr. Frank McMillan. Most days Devin is allowed "building time," when gets to leave the office and explore the entire building. This generally happens when no volunteers are around because Devin can be a little unpredictable with human contact.

One day, Devin was enjoying some building time privileges. When the time came to put him back in his office, cat staffer Robin Jackson picked up Devin to carry him down to his room. All of a sudden, Devin got feisty and tried to bite Robin. She set him back down on the floor instantly, without any idea how to get him back to his room.

Enter Cat World manager Michelle Warfle, spray bottle in hand. Using her best teacher voice, Michelle said, "Devin! Go to your room." Without missing a beat, Devin scurried off down the hall. When he paused — the one and only time — outside his doorway, Michelle said, "Turn!" He complied accordingly and darted into his room.

"If I hadn’t seen it with my own eyes, I wouldn’t have believed it," Robin says. "Needless to say, I'm practicing my best ‘teacher voice’ and carrying a spray bottle from now on!" 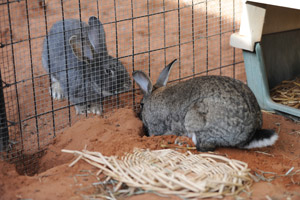 Bach keeps caregivers on their toes.

Another Best Friends’ animal keeping his caregivers on their toes is Bach, one of the rabbits at the Sanctuary. Bach likes to test boundaries. When he’s in his normal play area, Bach digs elaborate tunnels to try and get inside the other rabbit runs. There, at least, his attempts at mischief can only go so far. The cages in the play areas extend deep down into the ground, ending in concrete.

Yet caregivers like to give the rabbits a change of venue, letting them explore portable x-pens out on the patio area. Here, Bach has recently figured out how to get a little more traction with his determination. Bach uses his nose to push the entire x-pen wherever he wants to explore next.

"He’s like our own Dennis the Menace," jokes caregiver Robin Sunleaf.

Ultimately, the animals at Best Friends don’t reserve all their mischief for the caregivers. No, that wouldn’t be nearly enough fun. A lot of the time they play pranks on each other. Consider Marvy and Mousy, two young cats who moved into a mostly older cat room not long ago. Because of the medical nature of the room (incontinent cats), the population hadn’t changed for quite some time before they moved in. And since most of the cats in there are older, the "wild child" in the bunch used to be Megan. For perspective, when Megan wanted to shake things up, she’d let out a loud meow or two. Hmm. Not exactly a party crowd. 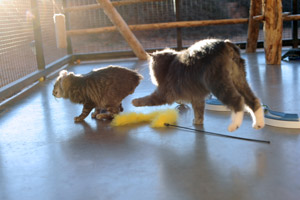 Well, Mousy and Marvy have upped the stakes in a hurry. They’re often seen wrestling around on the floor, zipping and flying around the room at breakneck speeds. "They’re kind of these fuzzy little buns rolling around," explains caregiver Judy Preus. A lot of the older cats don’t know what to make of all this crazy energy expenditure going on in their midst. Along the way, Marvy and Mousy make sure to include some of the older cats in the fun.

Consider Big Snow. Big Snow doesn’t often climb to the high spots in the room, due to a foot condition. Mousy, however, isn’t content to let his new buddy lay low all the time. He loves dragging Big Snow into games of chase. First, he’ll get Big Snow all riled up in a game and then Mousy scampers to the top of a cat tree to lure his new friend to higher ground.

Safe to say, they’ve had quite the impact on the status quo of the mostly senior citizens in the room. "Having that young, kitten energy has kind of woken them up," Judy says. After all, it’s kinda hard to take a nap with two furry rockets ricocheting off the walls all the time.

Adopt your next furry friend