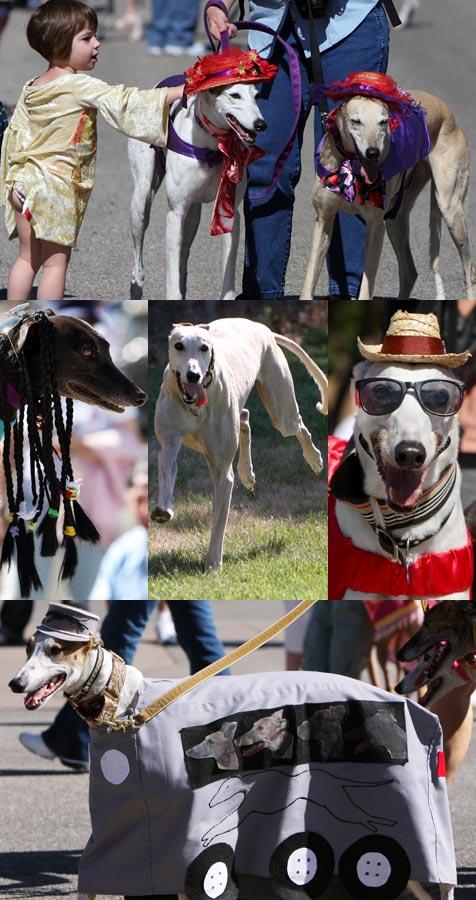 A gathering of greyhounds

On a sunny morning in southern Utah, nearly 300 greyhound dogs strutted tall and proud in a parade in their honor.

It’s very different from the past lives of many of these hounds, who once lived in kennels at the dog tracks where they were raced for sport. Instead of running, these retired racers – along with many others rescued from "breed farms" – paraded with their people down Center Street in Kanab at the ninth-annual Greyhound Gathering.

The sleek hounds, dressed in costumes that included a Greyhound bus, sombreros, colorful beads and sunglasses, came with their people from all across the United States, and from as far away as England and Canada for the three-day event.

"Seven ladies and their greyhounds are from Canada, [and] two are from England," said Claudia Presto, the event coordinator with Greyhound Gangs, as she announced the parade participants. Also on the scene were dogs from Michigan, North Dakota, Colorado, California, Nevada, Arizona and Utah. Claudia also shared a number of little-known facts about greyhounds, including that they can see up to a mile away and can run up to 40 miles per hour, "but only for short bursts." In addition, she pointed out, "They love to be indoors."

But on this day, the canines were enjoying the outdoors. One hound walking in the parade was Sancerre, a racer who was rescued from the Caliente track in Tijuana, Mexico, in July 2007. "Her racing name was Sol Angel," said her person Dana Provost, who lives in Las Vegas. Dana’s other two greyhounds, Renoir and Cezanne, were rescued from a Tucson, Arizona racetrack.

Another weekend event was a post-parade picnic at the Best Friends sanctuary, where hundreds of the dogs and their guardians relaxed on the grass as the sun went down. An auction held during the dinner was expected to raise $20,000 to help adoption groups find homes for even more rescued greyhounds. Once the dogs reach the age of 5, they’re retired. That’s when members of greyhound rescue groups, like those gathered over the weekend, step in to save as many as they can, although thousands of retired greyhounds are still put down each year.

At the picnic were Kathy Lazenby and Jason Ballweber from Brighton, Michigan, relaxing with their greyhound, Kelly. Kathy learned about the plight of greyhounds while waiting at a dentist’s office, when she stumbled across a magazine ad offering the dogs for adoption. She and Jason have adopted greyhounds ever since.

Also enjoying the picnic were Tammy and Jeff Brookhart with their greyhound Cat, who raced for five years and was bred for an additional six. Now nearly 12 years old, Cat has lived the past few months with the Brookharts in La Mirada, California, with their two foster greyhounds. Over the last 10 years, they’ve fostered more than 150 hounds.

Providing both permanent and temporary homes for dogs with such sweet, laid-back dispositions, noted Jeff, is the least he and his wife can do for the former racers, many of whom have scars and healed bones from injuries suffered from racing.

"They give us so much love," Jeff says. "What more could you ask for?"

Add love to your life and adopt a dog