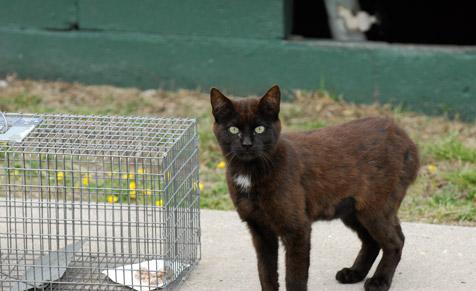 Vietnamese astrology, although less well known than Chinese astrology, designates 2011 the Year of the Cat. That should come as no surprise, considering all the great news happening on behalf of lovable and mysterious felines in 2011. Here are some of our favorite stories. 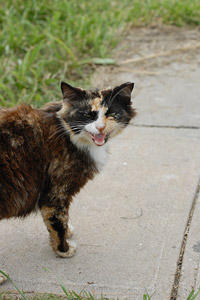 Island living can be great if you’re a person, but such a life offers challenges to community cats. In May, Best Friends initiated a collaborative venture with Operation Catnip and Sheltering Hands to spay and neuter the free-roaming cats on Tangier Island, Virginia. Though floods hindered their efforts, 250 of the roughly 500 cats were fixed. And the experience proved to be so rewarding that the veterinarians from Caring Hands Animal Hospital of Ashburn, Virginia, returned in September. Now they estimate roughly 90 percent of the island’s stray feline population is sterilized, and follow-up visits are planned to provide low-cost veterinary care for the residents’ pets.

Best Friends’ community cat spay/neuter efforts were not limited to Virginia. Our cat initiatives helped kits from coast to coast and in between. One exemplary effort was a Catnippers’ free one-day clinic in Las Vegas. It was no roll of the dice as volunteers came together to help get 83 felines fixed.

Getting a paw stuck in a fan belt is a scenario that could easily have turned into tragedy. However, this accident proved to be the first step toward a better future for one free-roaming cat. While Paws lost a leg, he gained a home, as the Best Friends staffer who fostered him during recovery fell head over heels in love with the little guy. 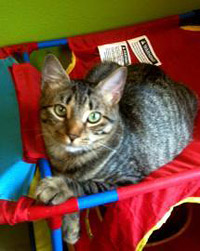 Sparrow gets a second chance.

There’s good news for Austin felines as well. Austin Pets Alive! (APA!), a Best Friends No More Homeless Pets Network partner, dedicated a new room for cats who have contracted the feline leukemia virus (FeLV). Cats who test positive and are scheduled for euthanasia at the city shelter now have a second chance. This most recent cat-saving program, along with their neonatal kitten nursery and ringworm ward, has contributed to APA!’s success in rescuing over 5,000 cats and dogs in 2011.

Speaking of lifesaving programs, Feral Freedom, a groundbreaking trap/neuter/return (TNR) collaborative effort that has proved successful in Jacksonville, Florida, has expanded to DeKalb County, Georgia. LifeLine Animal Project, a Best Friends No More Homeless Pets Network partner, has two spay/neuter clinics. Community cats picked up by DeKalb County Animal Services are taken directly to one of the clinics for surgery. Once recovered, the felines are returned to where they were found, completely bypassing the city shelter, which results in lives saved. In the first two months of operation, over 300 community cats have been fixed through Georgia’s Feral Freedom program.

TNR has proved to be the only humane and effective way to control community cat populations. However, some municipalities have laws against feeding or releasing cats. To help individuals advocate locally on behalf of stray cats, Best Friends developed a toolkit with editable materials designed to help citizens address bodies of government, like city councils. With these resources, it’s easier than ever to encourage communities to be cat-friendly. 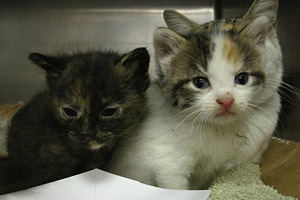 Six local rescue groups took a total of 76 cats (and even one dog) from Chicago’s Animal Care and Control, thanks to the Great Kitty Transfer, organized by Cynthia Bathurst of Best Friends and Safe Humane Chicago. The event occurred in June, when there was a high influx of kittens, and the shelter had over 200 felines in residence.

Cat-specific adoption events can prove to be successful. To highlight fantastic felines from coast to coast, Best Friends hosted the ACATEMY Awards in New Jersey and Los Angeles, featuring stars like Jean Clawed Van Damme, Gwyneth Pawltrow and Tom Cat Cruise. Hundreds of people attended the red carpet events in search of a star to add to their families.

When it comes to lives saved, it’s hard to beat the Cleveland Animal Protection League adopting out 193 cats and kittens in one nine-hour day. Thanks to the broadcasting of an emergency plea through social networking and the local media, the public responded. There were literally lines to enter the shelter, in front of the kennels, and to adopt. The event was such a success and so many cats were adopted that the shelter had to find additional felines to supply that day’s demand. 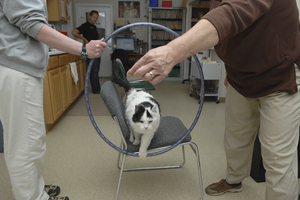 All the good news is not limited to outreach efforts. Back at Best Friends Animal Sanctuary, Raed had grown bored with the usual feline playthings, even the laser pointer. So his caregivers introduced him to feline agility training and it’s been a win-win. He’s getting much-needed exercise and mental stimulation, though he thinks he’s scoring extra treats. In reality, his rewards are kibble taken from his evening meals.