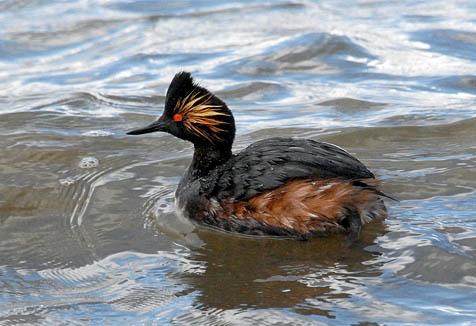 It’s a fairly common occurrence: a water bird finds himself grounded at a distance from that element the bird depends on for just about everything — water, which he needs not just for nourishment, but for flight and correct body temperature. That’s what happened to an eared grebe that Wild Friends, the wildlife rehabilitation center at Best Friends, recently treated and released.

Grebe in need of help

The grebe came from Panguitch, Utah, about 75 miles north of Best Friends. The grebe had more than likely gotten caught in a wind storm and blown slightly off his path while following the course of a river. The grebe was found on the opposite side of the highway from the river.

Like many water birds, grebes are designed in a way that they can only to take flight by skittering on water. When grounded and not able to access water, they’re in pretty dire straits, not just because they can’t fly (and thereby get to water), but because, without water, they’re unable to properly preen themselves. Preening and the insulating effect it has on their body helps regulate their body temperatures.

The grebe rescued in Panguitch was, for the most part, healthy when he came in. His body temperature was, however, out of whack, since he had not been able to properly preen himself during the time he was away from water. So, Best Friends licensed wildlife rehabilitators Carmen Smith and Barbara Weider kept him in a humid, well-heated space next to a dishpan of water, in which he could preen himself to his heart’s content.

Grebes are highly stressed birds, and therefore don’t do well in captivity. So Wild Friends kept him for a limited time, only a few days, before releasing him at a nearby reservoir, where he’d be sure to find his kind, and plenty of water.

Visit our wildlife center, Wild Friends, to see what we do to help rehabilitate wildlife.