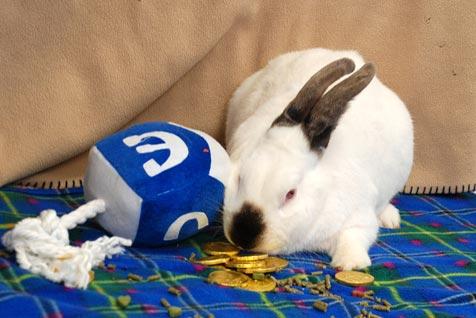 Bubba the rabbit got to thinking. He'd been reading up on Hanukkah and made a startling discovery. Eight days of presents. Not just one. "Oh, the possibilities ..."

Bunny gets his own play area

Here's a little background on Bubba. He came to Best Friends about a year ago from an overcrowded shelter. Ever since that time, he has been trying to find ways to make the universe spin around him. For a while, he tried the "woe is me" tactic by pretending not to get along with others. He told his caregivers the other rabbits were picking on him (and yeah, alright, maybe they were a little). So it was that Bubba moved into his very own play area. A plush single dwelling bachelor pad for the new guy.

Then he decided that the single life was dull. He didn't have anybody to steal things from. So he rigged the gate between his area and the next one over to swing open one night. Oh, guess who lived next door? Bonnie, the one rabbit who picks on everybody else. Yet, they get along just fine, as the staff learned in the morning! (Was he just pulling our leg with the whole poor-little-me act?)

Having a best friend really improved Bubba's outlook on life. He was now free to steal more treats, to steal more blankets, and to steal more toys. Then he expanded his me, me, me empire even further by gaining celebrity status. Bubba learned how to give a 'high five' and entered this talent in the Best Friends' Best in Show competition. And he won! Add a trophy and press time to his growing list of attention-getters. But Bubba didn't stop there.

He started learning how to pull blankets through bars from the next play area over. Yes, that's right. Bubba has now been swiping blankets (especially those that have treats lying on top of them) and toys from his neighbors. Sheesh -- he does like to have new things, doesn't he?

Bunny and a dreidel

So it should come as no surprise, then, that Bubba was found playing with a stuffed dreidel one day as Hanukkah drew nearer. ("Where did he even get that?") The way Bubba figures it, presents for only one day are for the birds. This year, he wants eight days' worth. "Let's light the menorah, folks!" he says. "And Happy Hanukkah!"

Read about bunnies as pets.