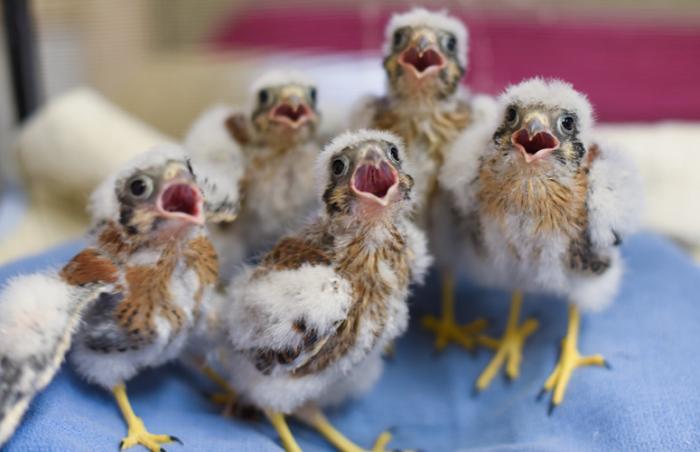 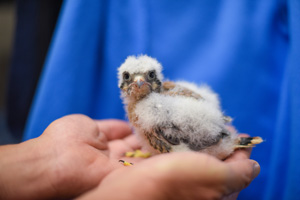 While it’s uncertain how five nestling American kestrels were abandoned by their parents, one thing was certain. They needed help. The baby raptors were discovered in a truck full of hay at a feed store in Page, Arizona, about a 90-minute drive from Best Friends. When officer Jeremy Felish of the Arizona Game and Fish Department saw them, their parents were nowhere to be found and the babies were on their own. Jeremy contacted Best Friends, the closest licensed wildlife rehabilitator for these northern Arizona animals, and soon the little birds were on their way to the Sanctuary for care.

When the birds arrived late in the evening, Best Friends staffer Todd Moore, a licensed wildlife rehabilitator, assessed their situation and noticed that they were a bit dehydrated and skinny, so he gave them water and food. By the next morning, they were all looking bright-eyed and a lot perkier.

The next day Carmen Smith, manager of Wild Friends (the Sanctuary’s wildlife area) and also a licensed wildlife rehabilitator, noticed that one of the kestrels was extra shy. When all the others made a mad dash toward the food, this one would hang back and, as a result, wouldn’t get anything to eat. That wouldn’t do, so Carmen moved him and one of his siblings into a separate enclosure. That worked out much better, and soon the shy one became brave, too, and began to run toward the food.

Preparing American kestrels for life in the wild

All five kestrels are now growing up side by side in two separate enclosures made of netting. Why netting? Wild birds should never be put into wire cages because the wires harm their feathers, which they obviously need for flight. In fact, a cardboard box is much better than a wire cage for the emergency transport of wild birds.

Even though the baby birds are growing up without their natural parents, their instincts are beginning to emerge, which means that once they’ve matured enough, they will be ready for release. Carmen says, “They’ve been doing really well so far. They are very lively.” At first they were so eager for food that whenever they heard someone approaching in the hallway, they started screaming. Now that they are a bit older, they’re getting smarter and no longer scream for food, which means they’re developing the survival skill of not alerting predators of their presence.

Wild baby birds, both raptors and songbirds, make noisy feeding calls to their parents; however, when they’re a little older, they learn to be cautious and always aware of possible nearby predators, including humans. Caution is a major survival skill for them.

Releasing birds back to the wild 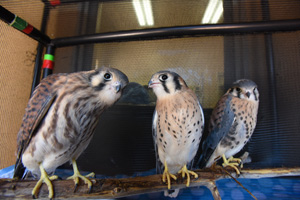 The birds are fledglings now, and recently they’ve been spending their days in an outside aviary. All five are the best of friends, so there is no danger of them becoming habituated to humans. Best Friends’ wildlife rehabilitators are trained to ensure that their patients always stay wild, so that they can be safely released. When the birds are ready, their release will be coordinated with the Arizona Game and Fish Department.

Until then, the young kestrels are enjoying each other’s companionship and looking forward to flying free in the waning days of summer.

Learn more about bringing hope and healing to more animals like these. Support our work.

Learn more about Wild Friends, Best Friends’ state and federally licensed wildlife rehabilitation center that helps orphaned and injured wild animals get back on their feet — and back to the wild.