Help for two cats with FeLV

Handsome Indiana, with his orange-and-cream-colored fur, isn’t well camouflaged when seated in a blue plastic bucket. Nestled on top of a pile of blankets in the sunlight, he’s found his happy place, while everyone around him witnesses cuteness overload.

Meanwhile, Indiana’s petite mother, Iowa, leaps gracefully from a cat tree into a volunteer’s lap. With her chubby grey-and-orange cheeks, and the tiny, delicate freckles on her pink nose, she’s far too cute to ignore, so she enjoys plenty of pets, affection and sleepovers with Cat World volunteers.

At first glance, both of these cats appear perfectly normal and, for the most part, they are. But, at slightly more than two years old, Iowa is already a survivor, since the majority of young kittens with feline leukemia (FeLV) don’t survive their second birthday. Indiana, who is a year and four months old, is getting some much-needed help to make it to that milestone and beyond.

Before coming to the Sanctuary, Iowa and Indiana spent time at the Best Friends Pet Adoption Center in Los Angeles, California. But, even though plenty of potential adopters were drawn to the two adorable cats, they weren’t having much luck finding a permanent place to call home. So this past June they moved to the Sanctuary, where they live in a part of Cat World reserved exclusively for cats with FeLV, a condition that weakens cats’ immune systems and makes them susceptible to secondary infections.

Read about a 20-year-old cat with feline leukemia.

FeLV cats: “Happy from the get-go”

It didn’t take the resilient pair long to adjust to their new living situation. “They moved in and were happy from the get-go,” says Cat World caregiver Amy Kohlbecker. On warm, sunny afternoons, Iowa and Indiana lounge in the outdoor cattery shared with their roommates. Life in CalMar is good. Despite the health challenges that may lie ahead of them, the friendly, affectionate cats deserve homes of their own, and Best Friends adoption specialists are working hard to make sure they get exactly that.

Both cats are ready to go to the right home. All they need is someone who understands that FeLV cats require special monitoring and prompt veterinary care if they do get sick. For example, when Iowa came down with a fever a few weeks ago, she took a quick trip to the clinic. Since then, she’s been feeling so much better that she’s even helping Indiana, who’s had a runny nose and a cold.

Cats at age two, three and beyond 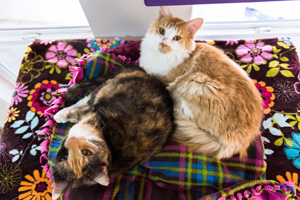 When Indiana is feeling under the weather, his nurturing mother helps nurse him back to health. While the pair may be a bit fragile because of the illnesses they’ve had so far, life isn’t just all about FeLV for these cats. They spend most of their time doing what they do best — being cats. Iowa particularly loves a feathered toy, and when one of her caregivers or a volunteer waves it around for her, she launches herself through the air to get it.

To look at them, you wouldn’t know that Iowa and Indiana are FeLV cats. And with close monitoring, supportive care and good education for the folks who will eventually adopt them, they stand an excellent chance of napping in the sunshine and leaping after string toys to age three and beyond.

Update: Great news! Since this article was written, both Iowa and Indiana were adopted together.

Bring hope and healing to more animals like Iowa and Indiana by supporting our work.

Learn more about the cats at Best Friends. Also, read about a cat named Ozzy with FVR, another common disease in cats.