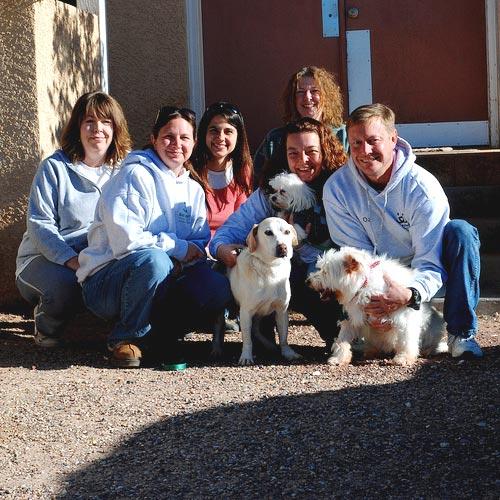 Helping an Ill Best Friends staff member and her dogs

In September, Best Friends staffers had to say goodbye to their friend and beloved co-worker Marilyn Theis. This week, they said their goodbyes to two of her dogs. Only this time, the occasion was a happy one.

When Marilyn became ill, her co-workers at Best Friends helped care for her five dogs. Then, whenever Marilyn, a longtime receptionist at Dogtown headquarters, was admitted to a hospital for treatment, they stepped in each time to care for them, either at the sanctuary or at her home.

Next, when she became house-bound and bedridden, staffers Curtis and Wendy Burgoyne, who worked with Marilyn in Dogtown, went to her home at least twice a day to walk and feed her five canines. And when it became necessary for Marilyn to move into hospice care at a local clinic, they took her dogs to visit her. Other staffers did their part too, filling in with dog care, shopping for her, and alternating daily visits to make sure she was not alone.

A celebration of her life

Marilyn lost her battle with cancer in September 2007, leaving her estate and dogs to Best Friends. Afterward, at a get-together at Angels Landing, a natural outdoor amphitheater at the sanctuary, her friends celebrated Marilyn’s life. She had planned it herself before her death.

As the event ended, a light rain fell, leaving a rainbow over Angels Canyon, home of the sanctuary. Marilyn, her friends say, would have loved it. It was as if she’d planned that, too. At the memorial, with her dogs in attendance, her friends remembered her soft-spoken manner and pretty smile.

"She was the best listener I’ve ever met," says Wendy. "We worked together at the same desk for five years. We became close friends. Even when they built a second desk in the lobby, we stayed at that same desk."

Besides organizing her own memorial service, Marilyn also left detailed information about her dogs – Nautica Woo, Young Huskgay, Charles de Dog, Sedona and Little One. She titled the missive "Marilyn’s Dog Children." For Little One, a West Highland terrier mix, she wrote, in part, that she was "overweight, very ticklish and itchy, timid and very cautious." Also, she added, she’s "bonded to Sedona," her yellow Lab and beagle mix. For Sedona, she wrote, "Bonded to Little One."

While Best Friends can’t always promise that pets who come in together will go home together, in this case, it worked out for nine-year-old Sedona and eight-year-old Little One.

Lisa Gore and Orin Osmon, who volunteer with Best Friends’ mobile adoptions in Las Vegas, were planning a trip to the sanctuary to adopt a companion for Manson, their Maltese. When they heard about Little One’s and Sedona’s attachment to each other, they decided to adopt both. (Nautica went home to a family a couple months earlier, and Young Huskgay, a husky, and Charles de Dog, a black Lab mix, are still living at Dogtown.)

It was a bittersweet moment for staffers, saying goodbye to Marilyn’s "dog children." But they’re going to have a wonderful new life.

"It was good to see them go home together," says adoption coordinator Kristi Littrell, "but I’m going to miss them."

Learn about leaving a legacy of kindness