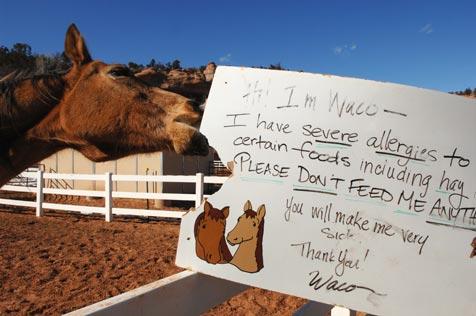 Food allergies can be a hard thing to live with. With a peanut allergy, for example, every item on a restaurant menu must be studied closely. Waco the horse, however, wishes peanuts were his only food allergy. The poor guy is allergic to everything under the sun except for alfalfa and carrots. Not much of point in heading to the local buffet is there?

Special diet for horse with allergies

Still, he has a good life. Waco has a specially prepared diet that ensures he never goes hungry, and he gets all kinds of TLC from caregivers and visitors to the sanctuary. Waco even gets to go on regular walks with volunteers. Not a bad setup!

All that having been said, sometimes you get the feeling Waco is on the constant lookout for opportunities to taste new foods. One of his favorite pastimes recently has been to lean over his fence and make chewing motions at the vehicles that drive by. Some might say he’s just being silly, but don’t you believe it. He wants to find out what a moving truck tastes like — good thing he’s not yet been able to pull off a taste test.

Because of his rather ambitious food soliciting, the caregivers decided to hang a sign for the visitors. On occasion, volunteers are allowed to give treats to certain horses who can handle them safely. Waco is most definitely not on the treat list. In order to guarantee no mix-ups, though, the caregivers decided to hang a large sign on his pasture that reads as follows:

"Hi, I’m Waco. I have severe allergies to certain foods, including hay. Please don’t feed me anything! You will make me very sick. Thank you! Waco"

Waco couldn’t help notice that people passing out treats would take one look at this sign and give him a wide berth. Whatever else Waco may be, he’s no dummy. He decided to take matters into his own hoofs: he ate the sign! (Yes, really!) Funny thing, he didn’t seem to have any health problems as a result. So now if Waco did visit a buffet, and if dry erase boards were on the menu, that would at least be three foods he could eat. …

But Waco, sorry to say, bud, the horse staffers are already scheming up a different sign that you won’t be able to remove so easily. Gotta say, though, that’s one gigantic A for effort!