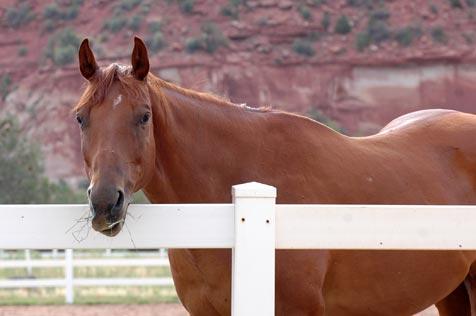 Horse who has been through a lot

There’s a funny scene in the first Indiana Jones movie where Indi, after a long and drawn out battle with his enemies, is hard-pressed to find a spot on his body not beaten up or bruised in one way or another. Well, that’s pretty much how life has been for Rocky, a new Best Friends horse.

In fact, as Best Friends vet Dr. Tara Timpson and horse manager Jen Reid examined Rocky, they came to a rather strange conclusion. "The only part of this horse that hasn’t been injured at one time or another is his right ear." Wow. Is that some kind of record? And get this, he’s only nine years old. That’s a lot of living in such a short time. One has to wonder if he took a fancy to extreme sports along the way.

Rocky has had a rough go of it, for sure. He’s also been moved around from family to family. He came to Best Friends when his most recent family couldn’t give him the quality of care that a guy like him needs. And what does he need, exactly? That’s not easy to pin down just yet. For now, x-rays and other tests are being done. But it’s safe to say he’ll need some work on his teeth, his feet, and possibly his shoulder. And that’s just for starters. You see, with horses, one problem often causes another. For instance, say his feet began to hurt. He might started walking in an unusual way to favor the good feet, which could have put his muscles and joints out of whack, which could make other problems pop up out of nowhere. The end result can resemble a giant knotted ball of string, making it really hard to see where the problem began or where to start fixing things.

But the horse caregivers are optimistic that he can make some very good progress. Turns out he’s already improved a bit, just by having some more room to walk around and work through the creaks and stiffness that are more often found on a horse three times his age. Hang in there, Rocky. And as a word of advice, while everybody is figuring out what to do with you, just be sure and protect that right ear!