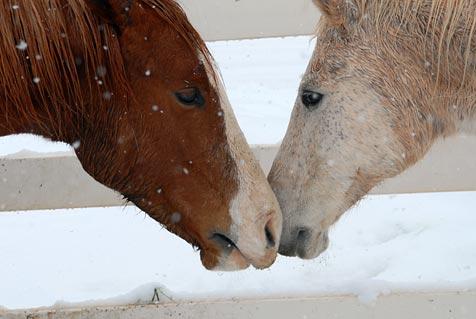 Horses with knee issues find a friend in one another

A true friend is someone who will share his very last cookie with you. It’s someone who has your best interests at heart, and someone who helps you become your best. All fine attributes, true, yet there’s one more key piece to the puzzle: a true friend makes life fun! (And perhaps, helps you forget for a time about those pesky details known as consequences. …)

Darby the horse has been at Best Friends for several years now. He came to the sanctuary because of knee problems that will never fully go away. They don’t limit him too much, but they do slow him down. Perhaps because of those knee issues, he has always been something of a misfit with the other horses — always the odd man out in the crowd.

As chance would have it, another horse at the sanctuary knew just how he felt. Red Wing has some knee issues of her own. And in the six months or so she’s been at the sanctuary, she too has ended up something of a misfit — the girl that nobody else wanted to hang out with.

Roommate shuffles happen all the time down at Horse Haven, for a variety of reasons. Nailing the perfect social chemistry in a pasture can take a lot of tweaking. One such shuffle brought Darby and Red Wing into the same pasture at last. From the moment they laid eyes on each other, these two have been best pals — in every sense of the word. You see, among other forms of camaraderie, they are each guilty of goading the other into playing harder than their knees allow!

Which means that one day you’ll see the two buds romping and kicking and bucking for all they’re worth, then the next day you’ll find them limping alongside one another in unison, walking it off. But hey, that’s what friends are for, right? Someone who’s there through the good times and the bad. Oh sure, one of them could always try talking a little sense into the other about taking it easy and such, but shoot, where’s the fun in that?

Sponsor an animal who could really use a friend