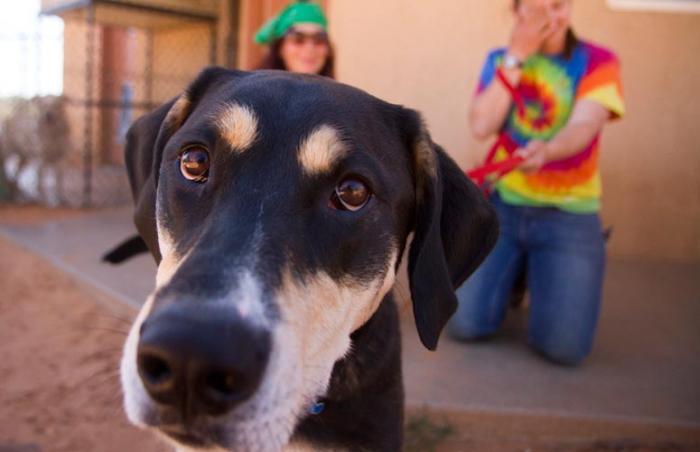 Hound mix terrified of the sound of trucks 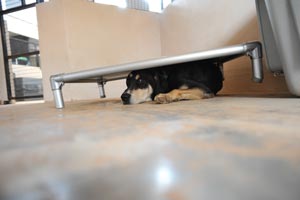 Elwood is a young, sweet-natured hound mix with some very serious fears. The sound of a dump truck going by is the scariest thing in the world to him, and thunderstorms are positively horrifying.

It all goes back to the time he was living in a shelter. Though the shelter staff took good care of him, he experienced a traumatic event while living there. An accident with a garbage truck caused a dumpster to come crashing to the ground right outside of his kennel. Poor Elwood was so terrified and so desperate to get away that he broke out of his kennel and bolted.

Elwood spent the next two days on the run, eluding those who were searching for him. Thunder crashed and lightning sliced through the sky as severe thunderstorms raged in the area. When Elwood was finally found and rescued, he was cowering under a deck. He was never the same after that day. His fears only increased in the shelter environment. He needed somewhere else to heal.

Since his arrival at Dogtown at Best Friends Animal Sanctuary in December, caregivers and trainers have been working to help Elwood overcome his anxieties and feel more at ease with his surroundings. The sound of thunderstorms and garbage trucks still send him into a panic. If he hears them while he’s on one of the many trails that wind through Dogtown, he’ll try to bolt back to the building for cover. If he’s already in his room, he’ll try to crawl under his Kuranda bed – anything to get away from the noise.

A big confidence boost for a scared hound mix

Though he looks almost comical hiding under his bed, Elwood is a bit too big for that. He needed a big confidence boost in order to live comfortably and happily. Luckily, he’s a smart guy and learns new things quickly. And Best Friends caregivers and trainers are teaching him that he doesn’t have to hide his handsome face. Anti-anxiety medication is helping Elwood relax. However, most of his therapy consists of him getting used to the things that scare him the most.

Because he is particularly fearful of several large trucks that drive around the Sanctuary, Dogtown trainer Emily Strong, along with Elwood’s caregivers, are recording the sound of the vehicles as they drive by on the dirt roads. That way, they can play the recordings inside the building, at a volume low enough that Elwood can hear the sound but not loud enough that he’s scared.

Making positive associations with noise that scares him 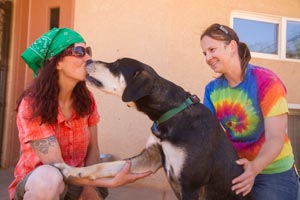 When the recording goes on, Elwood gets treats. When the noise stops, the treats stop. The idea is to have Elwood make an association between the noisy trucks and the tasty treats. As his comfort level increases, trainers will gradually increase the volume of these recordings until they are comparable to the volume of the sounds of the real trucks.

Elwood must also learn to deal with trucks that drive by while he is outside. He still gets scared, but whenever he shows any small sign of calming down or paying attention to anything other than the trucks, he is rewarded with verbal praise and attention. If his nerves take over again, his trainers and caregivers ignore it. The goal, in this situation, is for Elwood to form an association between calm behavior and getting attention and petting – something he dearly loves.

At only two years old, Elwood has plenty of time to heal. He’s realizing that good things happen when he is calm, and that the world really isn’t such a terribly scary place.