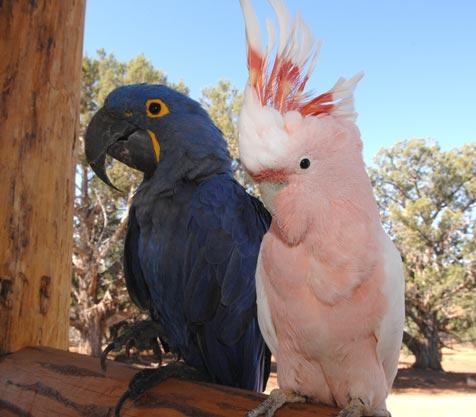 "Hey, don’t I know you?" Two Best Friends parrots, Honey and Joey, are finding they have a lot in common. No small wonder, considering they lived in the same home for 19 years. The thing is, though, they’re only just now getting to know each other.

Two parrots meet one another

Their previous mom loved them to pieces. She’d had both birds since they were babies and knew them well. Each bird is different. Joey the hyacinth macaw (who, incidentally, is the biggest parrot at the sanctuary!) likes to relax and watch the flowers grow. Honey the Major Mitchell’s cockatoo, on the other hand, is the kind of guy you wouldn’t exactly want to slip an energy drink. (Might cause a nuclear meltdown!) He’s hyper, way energetic, and loves to play hard and fast.

His mom feared that if she put the two of them together, hyper Honey would overwhelm mellow Joey. Each bird received plenty of TLC in their home, but always individually. They never had a chance to meet.

Until coming to Best Friends! They came to the sanctuary recently when the family was no longer able to take care of them. Best Friends staffers didn’t know the two birds had never met, so after a little while they decided to give them some supervised time together. Can you imagine? Somebody you’ve held long and meaningful conversations with across the room for almost 20 years and you finally get to meet face to face? How crazy would that be? The caregivers called their previous mom to tell her about it and she was thrilled.

At first, to be honest, Joey was indeed a little standoffish around Honey’s enthusiasm. But that didn’t last long. After a little time, he started to chat right back. Now, the two birds groom each other and get along perfectly. Best pals at last … only took 20 years!

You can also view all kinds of Best Friends birds looking for homes on our Adorable Adoptables page.